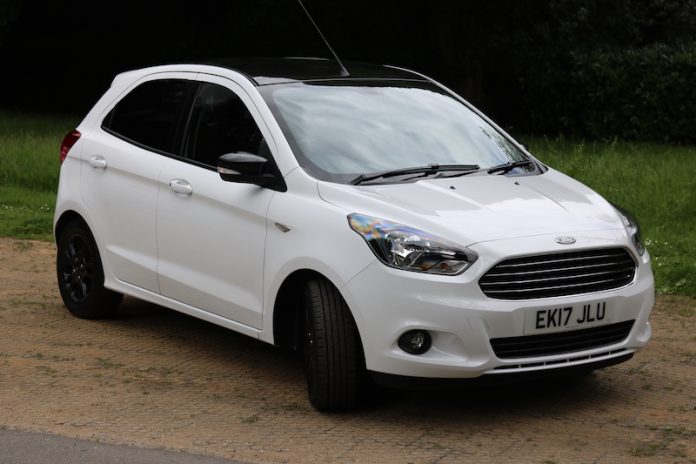 Last week or so, I tested the Ford Mondeo, a car that was very big in the 90s and now I’m testing another Ford model that was big in the 90s – the Ford Ka. Sort of. You see this is the Ford Ka+, a model that has replaced the standard Ka model. It’s five door only, it’s bigger, plus it has the underpinnings of it’s bigger brother, the Fiesta. So then, it looks as if the Ka has grown up, but does that mean the fun has gone?

I’m afraid this is an area where the Ka+ doesn’t get off to a good start if you ask me. Yes, I know beauty is subjective – eye in the beholder and so forth – but I’m not keen on the styling of the Ka+. It’s by no means offensive, but it’s rather generic and uninspiring. It’s certainly not going to stand out in a supermarket or force your neighbours to twitch their curtains when you pull up on your drive. Not unless you stick with the ‘Bright Yellow’ paintwork that comes as standard.

This however, is the White Edition, which means the body has been treated with Ford’s ‘Oxford White’, which is contrasted by black 15″ alloys, a black roof and black wing mirrors. Step inside and it’s clear to see this is a budget motor – yes there are some gloss black trims inside and a bit of silver on the dials, but it’s a sea of hard, scratchy plastics. Still, the seats have a decent design to them and the cabin as a whole is not the worst place to be, plus this model gets features such as leather steering wheel to make the inside more pleasant.

With the Ka+ being a cheap supermini, the list of kit is far from extensive. The base model Studio starts from £9,545 and includes basics such as air conditioning, Bluetooth, DAB radio, speed limiter, front electric windows, aux and USB ports, and of course, remote central locking. Above that, you have the Zetec, which is £1,000 more and is the better choice. Sat nav is not an option I’m afraid, but you can choose optional features such as heated front seats, automatic temperature control and rear parking sensors.

The Zetec adds a leather steering wheel, 15″ alloy wheels, Ford Sync system with 4.2″ TFT screen and cruise control. The model on test is the White Edition, which mirrors the spec of the Zetec, but with a white/black design. This is £900 extra though, and seeing as it brings no extra equipment, I urge you stick with the Zetec. There is also a Black Edition available as well if desired, and that too is £900 more than the Zetec.

The Ka+ only comes in 5 door guise, so it ought to be more practical than the three door model it replaces, and it certainly is. The space inside the cabin is pretty decent for a car of its size although taller passengers will find the legroom to be rather average. The headroom is pretty decent though, but I would have thought it will be a squeeze to get three adults in the back in comfort.

Finding a good driving position takes a little longer as the steering wheel only adjusts for rake and not reach, which is to be expected from a car in this budget. Having said that, it wasn’t exactly a hardship to get a driving position in which I was happy with, and the comfort of the seats were better than I expected.

As well as more space in the cabin, the boot has grown in size thanks to the car’s increase in size. Because of this though, the car is more of a supermini rather than a citycar, so based on this, the boot is bit on the small side compared to cars such as the MG3 and the Dacia Sandero, although it’s not a million miles away. Plus it’s better than the 224 litres offered in the last generation of the Ka. If you need more room though, you can fold down the 60/40 rear seats to give you an increased capacity of 849 litres.

One gripe I have with the boot is that there is no release button; instead you either have to press a release button inside the cabin or double tap the button on key. This is hardly a deal-breaker, but it is a little annoying and also a bit baffling. It seems a bit daft to set out to make the Ka+ a more practical proposition only to have a boot that doesn’t open at source.

As mentioned, the Ka+ has the underpinnings of the Fiesta, so it ought to drive well, and it does. There is only a 1.2 naturally aspirated engine on offer, which either produces 69 or 84bhp, fed to the front wheels via a 5-speed manual gearbox. So if you’re looking for an EcoBoost, you’ll have to pay a bit more for a Fiesta. The 84bhp 1.2 litre unit tested is not the best I’m afraid, with a 0-62 time 13.3 seconds you know it’s not going to be a firecracker. It requires hard work to get it going and you get a sense that it’d rather not be forced to the redline. The power comes in at around 4,000 revs but even then it still feels like progress is slow. Thankfully, the 5-speed manual attached to the engine is a pretty decent one, with throws feeling relatively short and pleasant. The steering also has a nice weight to it, plus it’s precise, so it’s really only the engine letting the package down at this stage. Having said that, the engine is smooth around town and at lower revs it’s nice and quiet. Take it out of town and on to a B road and you won’t be disappointed with how the car handles. Ok, so there is a bit of body roll, and the eco tyres don’t offer the highest amount of grip, but the Ka+ certainly holds its own in the corners. It makes for quite an engaging drive and it’s rather good fun pushing the car to a point where the tyres squeal, which is not a difficult feat – I actually managed it at about 30mph or so. If however, you don’t fancy driving like Lewis Hamilton, you’ll find the Ka+ a comfortable place to be. As I mentioned earlier, the seats are rather comfortable, plus the suspension is softly sprung, meaning that it soaks up the bumps rather nicely. This makes the Ka+ a composed car to drive and one that’s bound to be the best in this pricepoint. Visibility is decent, even with those dinky mirrors, and because of the car’s small size, it’s easy to park too.

The Ka+ does not posses a turbo, nor does it have stop/start. Despite this though it won’t cost the earth to run and in fact it’s pretty frugal. Whether you choose the the 69bhp or the 84bhp unit, you’re looking at a combined mpg figure of 56.5. In my experience I was able to achieve around 54mpg, which is just two of the official figure. Both engines also have the same 114g/km figures for CO2, meaning that for the first year of road tax you’ll be paying £160 for the first year with payments of £140 each year thereafter.

This means that the Ka+ is more efficient than the MG3 and it’s around the same as the petrol engines to be found in the Dacia Sandero, although the that’s able to offer a diesel engine that has a combined figure of a wallet-saving 80.7mpg. It’s cleaner too, as CO2 emissions are a very respectable 90g/km.

The Ford Ka+ may not be much too look at, nor will it treat you with a long list of standard equipment. But get behind the wheel and you’ll find an engaging driving experience thanks to its Fiesta DNA. Sure, the engine is about as gutsy food blender, but the ride and handling certainly make up for that. So what we have here is a strong alternative to those who want a car similar to the Ford Fiesta, but in a lower price bracket. The MG3 is one of the cheapest superminis money can buy on the market today, plus one car argue it’s a better looking car than the Ka+. It has a bigger boot and it offers good value, although it’s not without its downsides. The interior is dated and by comparison it makes the Ka+ look state-of-the-art and the ride is definitely on the firm side. Like the MG3, the Sandero is one of the cheapest superminis on the market, but it doesn’t have very interesting looks, nor does it have the badge appeal of a Ford. It is able to offer a diesel engine for improved economy though, so that is something to bear in mind, plus it has a noticeably bigger boot.