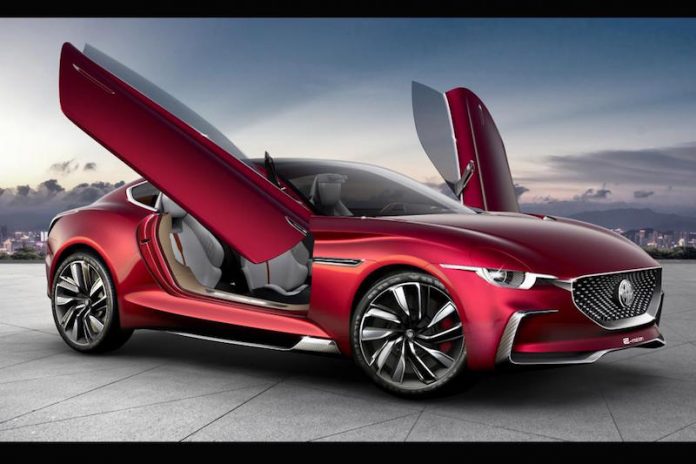 MG may have enjoyed its resurgence back in to the car market over the last few years, but even to this day, the MG name conjures up two seater roadster from yesteryear, normally driven by a man in his 50s with a beard. Ok, I’ll admit, that is a stereotype – I know a few members of the Gravesend MG Owners Club and they not what’d you call old men.

My point is that MG is one of the last brands you would expect to be announcing an all-electric concept car, but low and behold, that’s what the famous British brand has done. I looks rather handsome if you ask me, but sadly it does have a bit of a silly name. You see, it’s called the E-motion. It has been unveiled at the Shanghai International Auto Show today, but apart from having a questionable name, what else does it have?

This sleek coupé, with its roofline reminiscent of something you’d see from an Aston or a Jag, has an all-electric powertrain that will shoot the E-motion to 62mph in under four seconds. As well as being fast, it should get you far as MG claims a range of over 500km, which is over 310 miles for those who crave imperial units.

In terms of styling, I think it looks rather well proportioned – if it had a Jaguar badge on it, I don’t think many people would realise it isn’t, so the design team has done well there. The front grille and headlights have been inspired by the London Eye, but what will really catch your (London) eye are the doors that open up like a pair of wings. I rather like those..

Matthew Cheyne, Head of Sales and Marketing at MG Motor UK, commented: “The MG E-motion electric supercar concept demonstrates our global vision for the future. Alongside leading the way in design and capability, the next-generation model is the latest step in achieving the ultimate driving experience.

“The Shanghai International Automotive Show highlights our progress and capabilities, while further new models will continue this future-thinking strategy, embracing innovation to deliver ground-breaking vehicles for the drivers of tomorrow.”