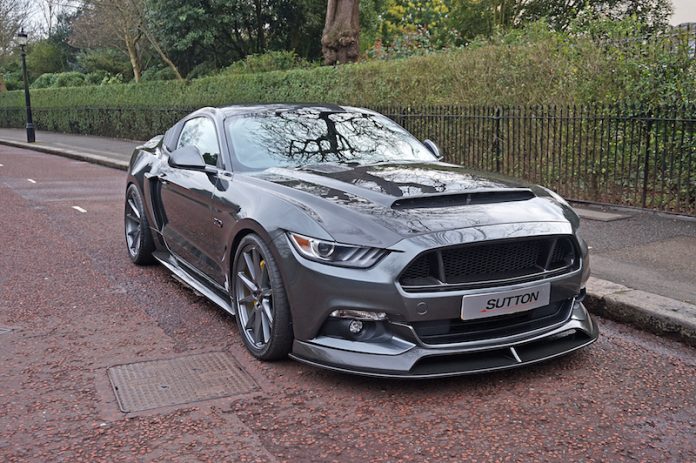 The Ford Mustang has been with us for donkey’s years, but it wasn’t until the current generation that it was available on this side of the pond. Not only can we get it with the steering wheel on the right side of the car, but we can also choose between either Greenpeace friendly 2.3 litre EcoBoost, or the hairy-chested 5.0 litre V8.

Don’t Fancy Either Of Those?

But what if that’s still not quite enough for you. Sure, the V8 throws out 415bhp, but what about a model that can better that by almost double? Well don’t despair, as Clive Sutton could well have what you yearn for. Say hello to the new Sutton CS800 Mustang, which is to be revealed at Top Marques event in Monaco tomorrow. What exactly can buyers expect though?

These aren’t the only two upgrades though, in fact, that’s merely the tip of the iceberg. As you can see, the CS800 is more aggressive in its stance. This is thanks to a ‘Super Snake’ bonnet, a carbon fibre front splitter with matching side skirts. There is more carbon fibre at the rear, plus the exhaust system has been upgraded with features such as sports catalyst and active-controlled quad tailpipes. Climb in to the cabin, and you’ll find a carbon fibre dashboard, plus big, hugging Recaro sports seats with Sutton stitching on them and Sutton badges throughout. Oh, and there’s also a nine speaker 1,100 watt stereo system, which is great for those who love their tunes, but surely nothing will better the roars from the engine? The new CS800 will be demonstrated tomorrow for prospective customers around the legendary Monaco grand prix track, as well as demonstrating the CS500 Mustang convertible and the F-150 Raptor.