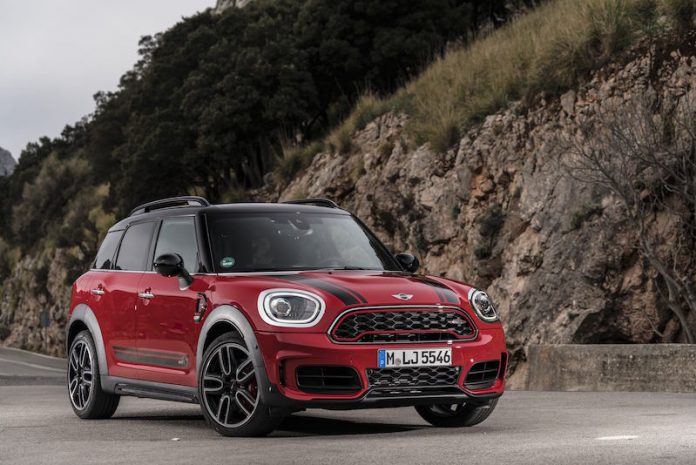 The Countryman, the largest ‘Mini’ ever, has now been given the John Cooper Works treatment to add performance to the added size and versatility. Available to order now with prices starting at £30,675, what can buyers can expect?

It’s no secret that the new Mini Countryman is a larger model than its predecessor and the same applies for the JCW version. Compared to the last model, it’s 19cm longer, 3cm wider, with a 7.5cm longer wheelbase. This of course, means there is more room inside, but don’t think this model has gone completely overboard on the practicality front. As this is a John Cooper Works, there is a healthy amount of performance to be had from the 2.0 litre four cylinder petrol unit. 231bhp is the figure offered here, meaning that it will race to 62mph in 6.5 seconds before hitting a top speed of 145mph. This power can either be fitted to a 6-speed manual gearbox, or for £32,275 buyers can opt for an 8-speed Steptronic automatic gearbox. No matter which gearbox you go for, you’ll be able to enjoy Mini’s ALL4 four-wheel drive system for added grip. As well offering a fair punch, the JCW Countryman boasts sporty credentials such as sports suspension, chunky Brembo brakes and a sports exhaust system which not only aids performance, but also adds a fruity character to the exhaust note. The styling is very much JCW orientated, meaning you’ll find a sporty bodykit and 18″ alloys on the outside. Inside, you’ll be welcomed by model specific sports seats, steering wheel and gearstick, plus the headlining is finished in anthracite, to help give the inside a sportier feel. There’s plenty of room to bring passengers along to the ride as well, plus the boot is larger than the previous model, offering 450-1,390 litres. What Kit Comes With It?

The Mini Countryman is not exactly the cheapest car going, so thankfully it comes with some decent amount of kit. Standard features include LED headlights, cruise control with brake function, 8.8″ infotainment system with satellite navigation, as well as USB port and Bluetooth. There are also three driving modes to choose from – Sport, Mid and Green – and rear distance park control is also standard. Just as well, as this car is not exactly ‘Mini’ is it…