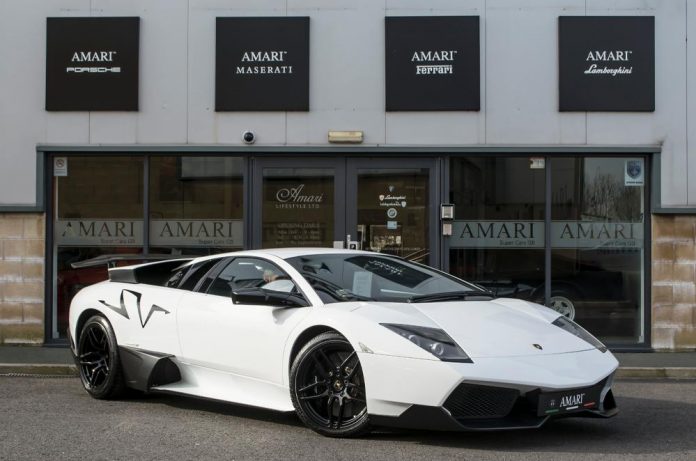 Happy Easter everyone! Now I know what you may be thinking – I featured a Lamborghini last week. However, the reason for another Lambo is because today I saw a stunning Lamborghini Murcielago, so I felt compelled to include one in this week’s WWS. This model isn’t just any Murcielago, this is the Superveloce model, or SV as it’s better known.

350 SV models were made throughout the world, but just 28 were made in right-hand drive so, it’s safe to say, this is a rare model. This particular example is finished in Avus Biacno and has covered just 6,477 miles since its production in 2010. Which is a bit of a shame really, as it means that it’s thumping 6.5 litre V12 has yet to be enjoyed to the max. It does however mean this is a very low mileage example.

Back to the engine though, it’s a typically traditional Lamborghini V12, full of many horses – 670 of them to be exact. As you can expect from a car such as this, it’s rather brisk. It will race to 60mph in 3.2 seconds – still fast by today’s standards – before maxxing out at a top speed of 212mph. All of this grunt is mated to a paddle-shift gearbox and four wheel drive.

This model also features the Aeropack wing, meaning you get that large rear spoiler at the back, and you’ll find lovely satin black alloys on each corner of this rare Italian bull. Inside, you’ll be greeted by black and red alcantara (perfect colour combo if you ask me), which is mixed in with a healthy amount of carbon fibre. You’ll also find SV logos on the inside, just in case you had forgotten just how special this Lambo is.

Because this Lambo is special, it also means it’s rather pricey. Offered for sale by Amari, this SV will set you back £299,995. If you do happen to have that kind of money, check out Amari’s website or Auto Trader.