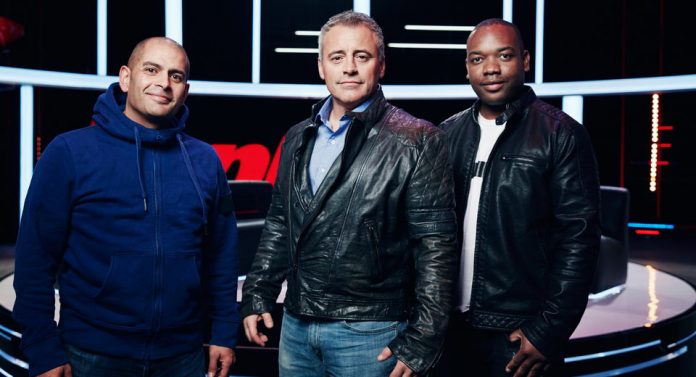 Happy Easter everyone! The majority of shops may have been closed for this religious holiday, but thankfully didn’t have a night off. Just as well really as there was no show last week because of The Masters. So then, what happened in tonight’s show?

The new Mercedes AMG GTR is one of my favourite cars to come out of last year. With its vibrant Green Hell Magno paint and its bulging bodywork, this is a car that is here to be noticed. It’s also here to take the fight to the track-focused Porsche 911 GT3 RS. Chris Harris seems like the obvious choice then to drive the new model, but instead it was the American. No, not The Grand Tour’s The American of course. Like his Ford GT film, it was a piece delivered very well, combining petrolhead enthusiasm and humour, making the clip thoroughly enjoyable to watch. Mind you, it would hard to make to make a bad film with the new GTR. As is the way, The Stig had a go after LeBlanc, setting a very respectable time of 1:17.0 – .1 of a second faster than the GT3 RS.

This week’s guest was northern comedian Ross Noble, a man with a love of motorbikes, cars and heavy machinery. Avid Top Gear fans will know that he has been on the show before, back then he would have use the Kia Cee’d as opposed to the rear-wheel GT86. The chat started of well, talking about Noble’s car history, but the chat soon turned to heavy machinery.

Now, I’ll be honest, I’ve found the random heavy machinery pieces that Matt LeBlanc has done to be a bit tiresome. Ok, they are a bit of fun at the time, but It just feels like it’s been put in to fill time and let’s face it, it doesn’t have much to do with cars. Mind you, seeing Noble and LeBlanc throw old Volvos at garden sheds…

Ah Cuba, a place where the 50s American classics rule supreme in this colourful and vibrant country. However, the country does now allow cars to be imported in to the country – albeit at a high cost – so does that mean that the 50s classics are in danger? Probably not, due to the costs involved, but Chris Harris and Rory Reid headed down to get a tatse of the local culture.

This meant they needed some wheels. The pair were handed £5,000 to get a used car, and it’s safe to say the pair went for two different approaches. Harris went for a Maserati Bi Turbo (where have I seen a used Massa Bi Turbo before?), whilst Reid stuck with the American muscle theme by enlisting the services of a Chevrolet Camaro.

The pair then set out to drive around the local streets to show off their cars with the locals and admiring their cars. It was fantastic to see how many different and wonderful cars the country had to offer. Reid then decided it would be a good pick up some hitchhikers, which went…well. This led to both cars being heavily overloaded and Reid being scared half to death by a…chicken.

After this calamity, Reid and Harris decide to do something a bit more sensible…sort of. The pair take to a local drag strip to race the locals, which ended up going just as well as the hitchhiking did…Unperturbed though, they head back to take the locals on once more. Only this time, there are…corners. May not sound very radical, but to this drag racing Cubans, it was a bit of an alien concept.

The race offered good entertainment and the film as a whole was decent, but to me it felt like it was lacking something. I was hoping for a proper ‘cheap car challenge’, in which the two would have to navigate situations of potential peril for points, but other than the racing there was no real challenge. It was still a good watch though and it was good to see more of Rory Reid, as that is one of few things that need to be improved with the new series of Top Gear.

We are now heading towards the end of the series, and I have to say it’s been a decent thus far.