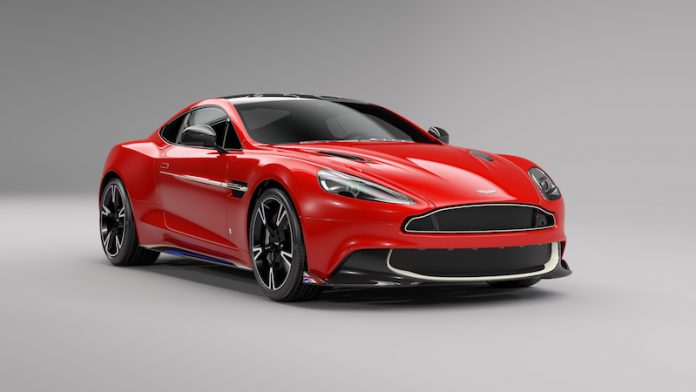 Aston Martin has its own branch where it commissions special models that are unique and bespoke. You’re probably heard of it – it’s called Q by Aston Martin. Think of it as Aston’s answer to McLaren’s MSO. Yesterday Aston Martin revealed its latest Q by Aston Martin model, which has drawn inspiration from the Red Arrows.

Only 10 examples will be made, which have been commissioned by Aston Martin Cambridge, with special design features and aviation inspired design included. The Red Arrows are a British institution, but in case you don’t know, it’s a highly accurate and precise aerobatic flight team that has been wowing the nation since 1965.

This model is finished in a rich, vibrant Eclat Red to mirror the colour used by the Hawks and the reason for the ‘Eclat’ name is because it’s a reference to the Red Arrows motto. This has then be complimented by white and blue carbon, plus there is a white side trail to resemble a smoke trail – one of the Red Arrows’ trademarks. The roof features exposed carbon fibre which has been treated with an inlaid ‘charge’ pattern, to mimic the canopy of a fighter jet – nice. As you would expect, the theme continues inside. This means you’ll find Pinewood Green inserts in the dash, and there is even Martin Baker Ejector Seat fabric used inside. I don’t know about you, but I think that is super cool. Let’s hope the car doesn’t decide to throw you out whilst you’re driving though, otherwise it would be like a scene from Goldfinger. On the seats you will see the classic Red Arrows emblem, which has the 9 iconic planes in their equally iconic ‘diamond’ formation.

The cabin also features the steering wheel from the super rare One-77, which has been paired with a bespoke centre rotary toggle switch, inspired by the switchgear used in aviation. Helping to complete the look are door cards that have embroidery of the iconic ‘Vixen Break’ a spectacular high-G 9-aircraft formation.

The price for this wonderful new model has not been released at this moment but the 9 lucky people to get their hands on this car will receive a full race suit, racing helmets, a bespoke bomber jacket and a Vanquish S luggage set. This is finished off with a 1:18 scale model of both the car and the iconic Red Arrows Hawk jet. Hang on, you said there were 10? Yes that’s right, but one has been donated to RAF Benevolent Fund, the charity established to provide support to former servicemen and women and their families.

This model will be available to win in a raffle and if you want a chance to win, head to http://www.jardinemotors.co.uk/aston-martin/news/aston-martin-red-arrows/

If you do fancy piloting the new model, you will need to get in touch with Aston Cambridge and see if you’re able to earn your wings.