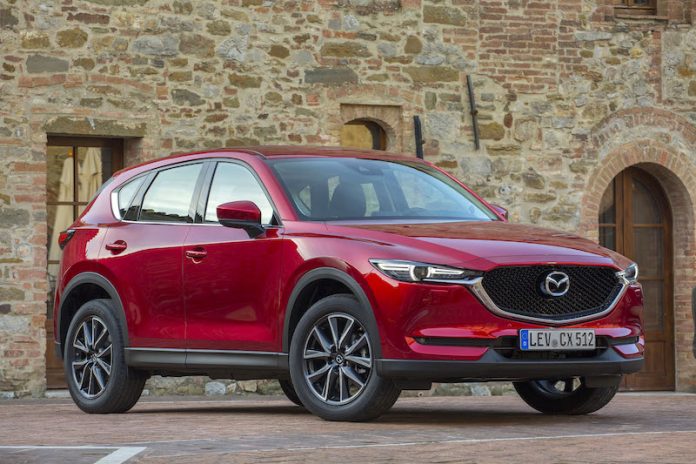 Having received its European debut at this year’s Geneva Motor Show, the new Mazda CX-5 has had its prices revealed ahead of its release on the 30th of June later this year. The CX-5 has been a successful model for the Japanese brand as it has represented around 25% of Mazda’s global sales.

How Much? What Can We Expect?

The base model will start at £23,695 and for that buyers will receive the SE-L Nav trim with two-wheel drive and a 2.0 litre petrol engine produces 163bhp. On top of this, the SE-L Nav offers features such as 17″ alloy wheels, LED headlights with LED fog lights, automatic lights and wipers, front and rear parking sensors, cruise control, dual zone climate control and of course, satellite navigation. If that isn’t quite enough, you can op for the Sport Nav trim, which starts at £26,695. This too has two-wheel drive and the 2.0 litre 163bhp engine, but it adds features such as 19″ alloy wheels, reversing camera, black leather seats, power tailgate, heated front seats and steering, keyless entry, HUD and BOSE sound system, just to name a few.

If you’re looking for either an automatic gearbox, four-wheel drive, a diesel – or all three – then fear not, as Mazda can also cater for you. The automatic gearbox is only available with the diesel though, so petrol lovers will miss out. The same applies to four-wheel drive – once again that is only available with the diesel engines. There are also optional extras including metallic or pearlescent paint which will set you back anywhere from £560 to £800 depending on which finish you go for. Stone leather can be chosen instead of the black leather in the Sport Nav models, which will cost £200 extra. There is also a safety pack which will cost an extra £800, offering features such as Adaptive LED Headlights, Blind Spot Monitoring and Rear Smart City Brake Support.

The new model will be available to buy from the 30th of June.