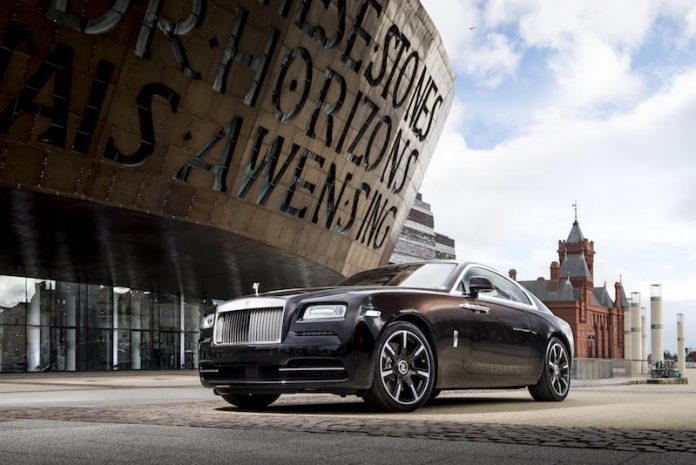 British music and Rolls-Royce have proved to be rather successful exports over the years, so it seems rather natural to combine the two. The British luxury brand has commissioned nine special Wraith models to celebrate the works of artists such as Roger Daltrey CBE, Sir Ray Davies and Sir George Martin.

This is what the special collection is to be called and it pretty much does what it says on the tin. The first four of the collection were revealed at the Sanderson Hotel in London, with Daltrey, Sir Ray Davies and Giles Martin in attendance. Each car from the collection is completely bespoke and will be sold later this year, with a proportion of the sale figure going to the artist’s charity, including the Teenage Cancer Trust.

So, Tell Me More About The Cars

Let’s start off with Mr Daltrey’s car, nicknamed ‘Tommy’. Feature design elements lifted from The Who’s iconic album ‘Tommy’, this Wraith has an eye-catching bonnet design based on the 1969 album’s artwork and sits on a ‘Lyrical Copper’ paintwork. A blue coachline runs down either side of the car, with further references to the album’s artwork joining it.

The references also continue onside – each one of the headrests is covered with motifs from the album’s design and the scuff plates also feature lyrics from the songs ‘Tommy Can You Hear Me?’ and ‘Listening To You/See Me’. The money from the sale of this car will go to the Teenage Cancer Trust. Daltrey has also actually commissioned two cars for the collection so the TCT will benefit two-fold from rock and roll legend.

Roger Daltrey CBE commented: “It’s been immense fun working in collaboration with Rolls-Royce to create two cars which capture some of The Who’s iconography so beautifully. The ‘Tommy’ car is truly a work of art, and Mike McInnerney and Rolls-Royce’s designers have done a great job bringing to life themes from the album and its artwork. Both cars will raise vital funds and awareness for the Teenage Cancer Trust, and will be among the ultimate collectors’ pieces for any The Who aficionado.”

Sir Ray Davies’ Wraith also features inspiration from album, this time it’s from The Kinks’ album ‘Arthur (Or The Decline And Fall Of The British Empire)’. This is not only a rather long album title, but it’s also one from 1969. This Wraith also features lyrics on the scuff plates, only this time it’s from the songs ‘Shangri-La’ and ‘Drivin”, plus it’s been handwritten by Davies himself to add a personal touch.

The back seats feature embroidery of designs from the album’s artwork and the headrests are adorned with his signatures. Finishing this bespoke Wraith are two umbrellas in the doors featuring the lyrics ‘When it’s raining on a sunny afternoon, in the summer time’, taken from the hit song ‘Sunny Afternoon’.

Many would argue that The Beatles are the most successful band ever but many forget how much of a part Sir George Martin was a part of the success. He sadly passed away in March last year, but his legacy lives on. His son Giles has paid tribute to his late father by designing a Wraith that features the names of the band’s 30 number-one hit singles on the rear seats.

The headrests proudly bear the legend’s signature and the copper scuff plates are engraved with a quote reading, “The recording is not what one hears, but what one must make others hear”, uttered by the man himself.

Giles Martin said, “My father had a huge impact on British music during his career, and I wanted the Wraith to celebrate a lifetime of achievements. It was a thrill working with the Rolls-Royce team to feature each of his 30 number-one hits, and I hope this is a fitting tribute to a figure who did so much to influence and enhance the world’s perception of a golden era in British popular music.”

So four cars revealed today, means that there are five more to come, designed by music legends including Dame Shirley Bassey (her car pictured below), Ronnie Wood and Francis Rossi CBE from Status Quo. If the first four Wraiths are anything to go by, these will be something rather special.