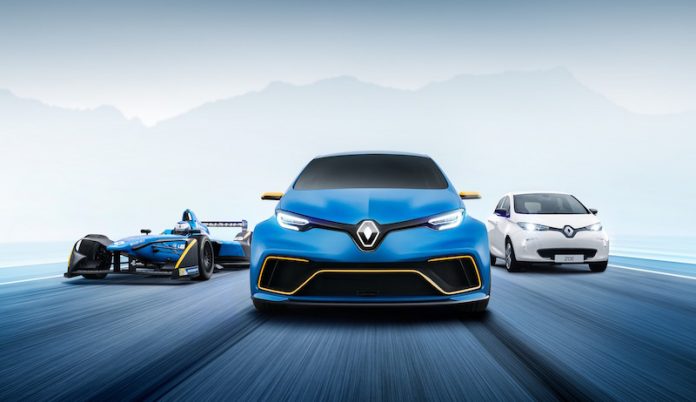 I must admit, when I saw the press release for the Renault ZOE E-Sport Concept, I pretty much dismissed it. “Oh look, Renault has tarted up its ZOE model” I thought, “What next?” This turned out to be a mistake as upon second reflection, the ZOE e-Sport Concept looks pretty exciting on paper despite the lack of a combustion engine. Big Things, Small Packages – You Get The Idea

The e-Sport Concept may have the same basic shape as its humdrum sibling, but its Renault e.dams racing team-inspired satin blue colourway will you differently. That’s not the only part of the car that is race-inspired – the car’s platform is also different to the traditional ZOE. Its sits lower and wider, on 20″ alloys with centre locking wheel nut. The car is also four wheel drive to help contain that savage power. The body features components made of carbon fibre, meaning the car weighs in 1,400kg, which is good going, considering the batteries alone weigh 450kg. Those batteries may be heavy, but they pack a big punch as the two electric motors they power offer a power output of 460bhp and 640Nm of torque. Sorry, come again? That means you’ll hit 62mph in just 3.2 seconds and it will hit 130mph in under 10 seconds.

To help get this kind of performance, Renault drew from experience gained in Formula E, in which the brand is currently reigning champions. Formula E cars may be single seater, but the E-Sport Concept has room for a passenger, so they’ll be able to enjoy the rapid electric pace too. They’ll be able to sit in an snug cabin lined with plenty of alcantara to give an upmarket feel. Other racing additions include a rectangular steering wheel that gives the driver a better view of the road ahead as well as Recaro seats with racing harnesses, adjustable suspension and Öhlins dampers. They are joined by bigger brakes, double-wishbone suspension and four driving modes. Helping to complete the whole ensemble is a Formula E-inspired diffuser and a chassis made using a tubular space-frame and Kevlar panels, meaning the EeSport Concept is FIA-certified and can be used on race tracks. I’m glad I gave this press release a second look, as it was fully worth it. Weill it make production though? That is the burning question…