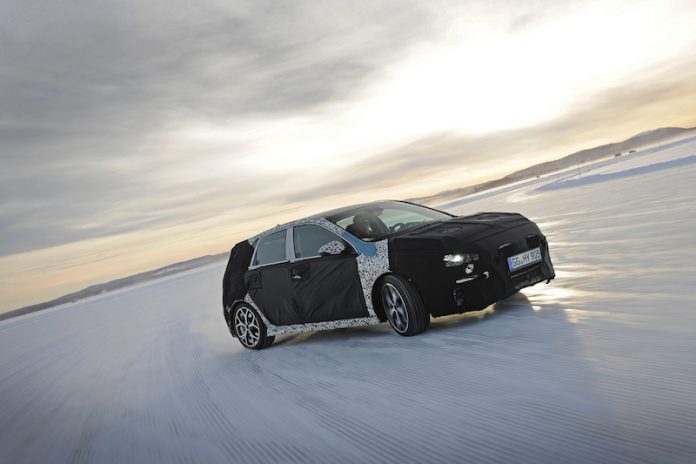 The hot hatch market is as popular as it’s ever been with cars such as the Ford Focus RS, Honda Civic Type R and Mercedes A45 AMG selling faster than they can be produced. The aforementioned brands know certainly know their way around a sporty hatch, but now Korean brand is throwing its hat in the ring.

It’s not the first Korean brand to enter in the hot hatch market however. Kia beat them to the punch with the Pro_cee’d GT, which sounds like something you’d use as a strong password. Oh no wait, that’s silly, it has no numbers in it. Kia gave it a good go, but the price tag was too hard to swallow for many, meaning it’s been somewhat forgotten. So, with this in mind, it could be a good time for Hyundai to unleash its new i30 N, which will join the standard five-door and estate models. The release date for the N will be the second half of this year and to make sure it’s ready, the brand has drafted in rally driver Thierry Neuville to drive it flat out on a Swedish frozen lake, because why not?

So, What About The Car?

Details of the car itself are still kept well under wraps – just like the car’s body. The testing may look like a good excuse to go out and have some fun, but there is important work to be done – mostly. Neuville will be testing aspects of the car such as the electronic stability control, the limited slip diff, steering, suspension and tyres, in conditions as cold as minus 30 degrees. Hmm, that bit doesn’t sound as fun…

“So many people have been looking forward to this car, so it’s a pleasure for me to be testing it,” said Thierry Neuville. “The engineers have done a great job on the gearbox and the differential. There is good traction and good stability in the slippery testing conditions. And it’s very easy to handle. A normal driver should get a sensation similar to that of a racing car.”

No doubt details of the car will be released nearer the time, and as a hot hatch fan, I very much look forward to that.