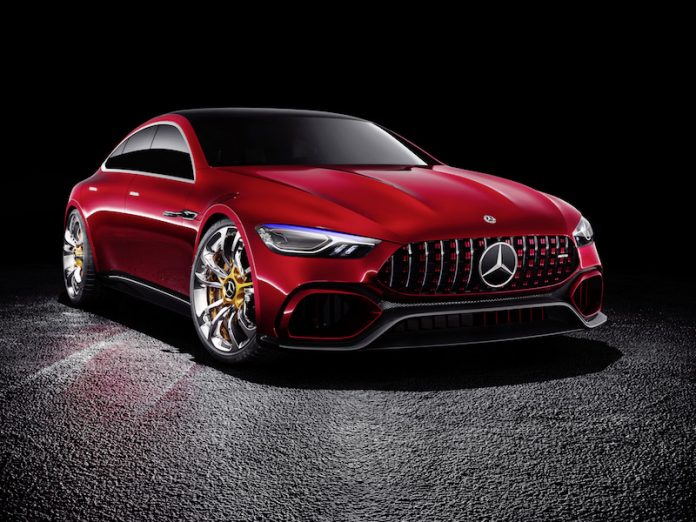 Like my Lamborghini article, I’m a bit behind the times with this one. However, if you’ve ever seen a Mercedes press release, you’ll realise you need a to budget some time to read it, let alone write about it. The Mercedes AMG GT Concept is another model that has received a lot of talk at this year’s Geneva Motor Show, but what’s all about?

Unlike the other AMG GT models, the GT Concept features four doors, which of course means there’s room in the back for passengers. This means it’s more usable as an everyday proposition compared to the current GT models. However, don’t think it’s compromised performance for the added practicality.

Not only does the GT Concept have a 4.0 litre biturbo V8 petrol engine, it has an electric motor, making it a hybrid. The pairing is rather biblical, as a power output of 805bhp, which is bound to be plenty for pretty much any driver. The top speed has not been confirmed by the German carmaker, but the firm has stated it will hit 62mph in under three seconds.

As well as hybrid power, which is flavour of the month in the automotive world, the AMG GT Concept has autonomous capabilities, but that is merely the tip of a technological iceberg. The GT Concept also features futuristic lights and an innovative hybrid drive system that has been inspired by Mercedes Formula One Racing team. You can choose to use system in three ways; electric only, V8 only, or a combination of the two. The engine can also help to charge the batteries as well energy recovered from braking. The batteries have been kept as light as possible, plus segments of the body have been built using carbon fibre. The car is also more aerodynamic as the wing mirrors have been ditched in favour of cameras and there is also a wide carbon fibre diffusor at the rear for better downforce.

It’s yet to be confirmed when the AMG GT Concept will go in to production, or indeed how much it will cost. Watch this space…