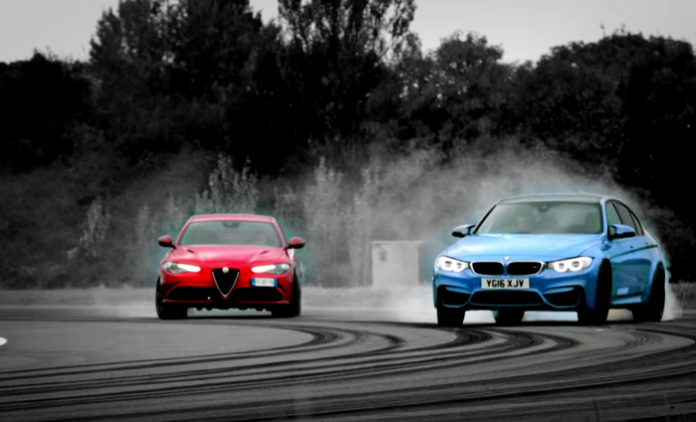 So then, week two. The first episode gave us a flavour of what to expect from the new Evans-less series, and I have to say, I rather liked the taste. Was the second episode able to continue the momentum gained last week?

The Alfa Romeo Giulia was easily one of the best looking cars to come out of 2016, so it almost feels criminal what Harris did to the one lent to him. I will get to that a little later though. We’ve already seen Jeremy Clarkson test the Giulia on The Grand Tour, so it was interesting to see what Harris thought of it. Like Clarkson, Harris waxed lyrical about the new model, stating that this was the first proper Alfa since the 70s.

What about the GTV? Or the 8C? Or the 4C for that matter? I fear I may be taking him too literally, but I thought it was a point worth raising. Other than that, I really enjoyed his view on the new QV, and I also enjoyed his metaphors as well. His genuine passion really shines through in this review, which makes it very engaging to watch. There’s one part of the review where Harris states he can drift the car anywhere, so to prove that point, Rory Reid joins the film with a wall made of “frangible” material. Like you, I had no idea what that meant, but basically it’s a fancy way of saying fragile. This turned out to be ironic, as you’ll find out in a few moments.

The wall had a Giulia-shaped hole in it which Harris had to get through. He did get through on the first effort, but in doing so he broke the wall, which actually shattered the windscreen of the Giulia. Don’t worry though, Harris did in the end. The Stig then returned to take the Giulia around the track, which did so in a time that was quicker than the BMW M3.

The first episode had James McAvoy on as the guest, and he appeared rather early before lingering around to see his lap time shown. I must admit I thought it was a bit of a weird way of doing it and I thought it was only for the first show, but it looks like this format is going to stick.

This is because Broadchurch (I love that by the way) actor David Tennant also turned up moments after the first film had finished. He exchanged some jovial banter with LeBlanc, Harris and Reid which I did enjoy, but it felt like it wasn’t really going anywhere. I felt like ‘filler’ if you ask me. We then saw a clip of Harris trying to teach Tennant the brand new GT86, where Tennant gave me a chuckles as he scared Harris half to death.

With Tennant remaining on the sofas with Rory Reid, it was time for Matt LeBlanc and Chris Harris to introduce the next film in which the producers had set the two the challenge of using convertible supercars in ever-changing conditions. Harris went with a Porsche 911 Turbo S whilst LeBlanc went for a more exotic Lamborghini Huracán Spyder – good man!

The pair set off from Las Vegas and head towards Mammoth Mountain, experiencing all four seasons on their journey. They were presented with some challenges although the way, the first being a race starting with the roofs down and ending with the roofs up. Harris played it sensible, putting the roof up before starting whereas LeBlanc put the hammer down. I won’t tell you who won, but I will say LeBlanc got a bit wet when “spring” came.

The “summer” section consisted of the pair swapping cars as they ploughed through the Nevada desert. The shots here weren’t quite on par with the ludicrously high standard set by The Grand Tour, but it was beautiful nonetheless. Predictably, LeBlanc and Harris criticised each other’s cars before they got to their next leg of the journey.

The pair end up in Darwin as Harris made schoolboy jokes about his roof erecting 4 seconds faster than his American colleague. Maybe his Porsche had a special “blue pill” option? Who knows? That is where the first part of the film ended before it’s back to the studio, where a certain Mr Tennant is still waiting for this lap to be played. Oh he did pretty well by the way, despite giving the brand new GT86 a character-building dent.

After the Tennant is finally removed from the studio, we go back Stateside to the Supercar challenge. Well I say challenge, LeBlanc is adamant the Porsche 911 is not supercar, so in his eyes there is no challenge. I’m kinda with him on that one – yes the Porsche has supercar speed, but I don’t think it’s quite exciting enough. That is a debate for another time though.

Falling Down The Mountain Only To Go Up Another One

The next challenge was a rather interesting and well thought out one. The pair took it turns to start at the top the Sierra Nevada mountains to see who could get down the bottom first. This may seem straight forward, but they had to roll down in neutral. This may not seem particularly exciting, but believe me, they really picked up some speed! One of the pair picked up a lot more speed than the other though, much to my surprise.

That was the “autumn” – or fall if you’re a yank – over and done with, it was time for one more season – winter. Mammoth Mountain was the venue of choice for this challenge in which LeBlanc and Harris had to head-to-head on a snowy, ice trail. It looked like great fun and there was something strangely satisfying about seeing a Lamborghini with a grille completely filled in with snow – good work LeBlanc!

Predictably in supercars, they got stuck one or two times, but both were able to make it to finish line of the two mile course, proving that supercars can be as versatile as they are exciting. I personally thought it was a well thought out film that highlighted the new found chemistry on Top Gear, helping to give the new format its own identity.

All-in-all, it was another solid effort from the Top Gear boys, although I’n still not convinced with the format that’s being used for the guests, BUT it’s a lot better than Star in a Rallycross Car, so I suppose I can’t complain too much. Next week has the drop-dead gorgeous Aston Martin DB11 and there will be Caribbean motorsport, so I’m looking forward to that!