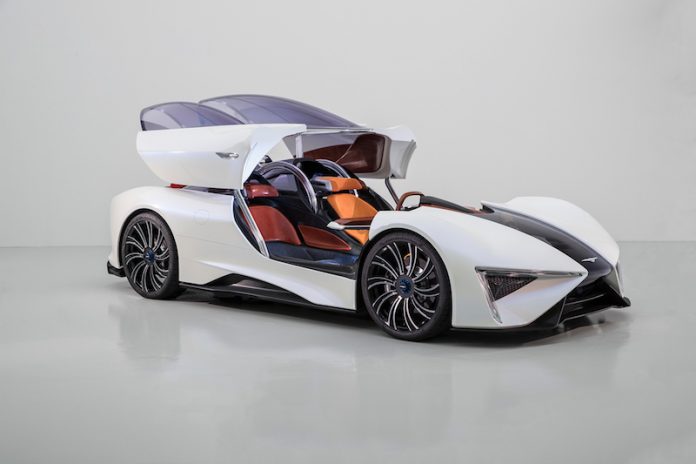 The Techrules Ren supercar is a model I have been looking forward to seeing as there was plenty of teasing from the Chinese brand. Little bits were given out here and there, but now the Geneva Motor Show is in full swing it’s been revealed.

The price and release date have not been revealed as of yet, but that’s probably a good thing, as this will allow potential buyers to weigh up the options. You see, the car itself has a choice of three seating configurations, a choice of two batteries and if that wasn’t enough, there is also a choice of how many motors you want to power the car. Talk about covering all bases.

The most powerful layout will be to choose the six motor configuration, which has four at the rear and two at the front. The power this offers is difficult to put in to words, so let’s use figures instead. 1,287hp and a staggering 2,340Nm of torque. 0-62 is over and done with in just 2.5 seconds, and the Ren will continue 199mph. Ok, so the top speed isn’t going to trouble a Bugatti Chiron anytime soon, but because it’s electric, the power will be immediate.

One of the highlights of the Ren is the cutting edge TREV system which helps to charge the batteries. TREV may sound like one of the lads you meet down the pub, but it actually stands for Turbine-Recharging Electric Vehicle, which pretty much sums the car up in a nutshell. The car will be able to cover 124 miles in electric only mode, but with the help of turbines, that can been increased 1,243 miles with 80 litres of diesel, depending on the configuration of course.

Yeah, the diesel doesn’t seem like the most forward thinking fuel in a car as high tech is this, but the Chinese brand has stated it could replaced by natural gas or hydrogen, which will of course emit zero emissions. The turbines do not actually help to power the car – instead they will only activate when the battery is depleted.

The Tech Doesn’t Stop There

Although the turbine technology is clearly the talking point here, but step inside the well finished and stylish cabin, the technological theme continues. There are displays for three cameras that act as wing mirrors and a rear view mirror, plus there is a display in the steering wheel that is self-levelling. The headrests of the seats feature microphones and speakers so the occupants can converse with each other, plus there are screens that enable video chats. That’s bound to come in handy when you’re tearing around your nearest race track…