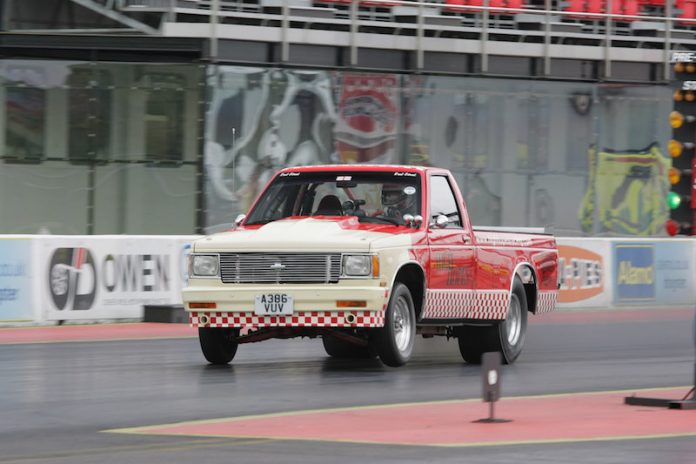 It’s not all about the Geneva Motor Show, you know. Ok, it mostly is this week, but here is some different news on which to digest. The pick-up truck isn’t exactly the most popular mode of transport in Britain, due to it size and its somewhat redneck image.

A Pick-Up Truck, But Not As You Know It

However, Classic Car Auctions will be offering a rather interesting pick-up as part of its sale at the Practical Classics Classic Car and Restoration Show at the NEC, Birmingham on 1st and 2nd April. It’s a 1984 Chevrolet S10 Truck and you may be wondering what’s so special about it.

Well, under the bonnet sits a freshly built 7.0 litre Chevy V8 engine which produces 640bhp. That’s not actually the car’s total output though, thanks to a nitrous oxide kit, the Chevy is able to offer a total of over 900bhp – about the same as a McLaren P1. This makes it the fastest pick-up track in Britain. So with that mind, it’s only natural I throw some figures at you. This large chunk of American power will hit 60mph in just 1.3 seconds, which is almost twice as fast as a Porsche 918 Spyder. The Chevy will hit 124mph in 5.6 seconds and then on to a top speed of a bit more sedate 150mph. The S10 has been around the race scene for some time and is well-known at venues such as Santa Pod. The current owner has owned it for 24 years and invested a staggering £85,000 in to the 80s pick-up. Despite of all this money pumped in to vehicle, the car has an estimate of £30,000-£35,000. The Chevy comes with plenty of history and MOT documentation as well as a current MOT that is valid until November this year.

Speaking ahead of the sale of the pick-up, classic car specialist at CCA, Simon Langsdale said: “Wow, what a machine this is. We’ve never auctioned anything like this before so it’s fantastic to include it as part of our biggest ever auction. It really is a unique piece of kit, especially as it is street legal and can be driven on the road.”