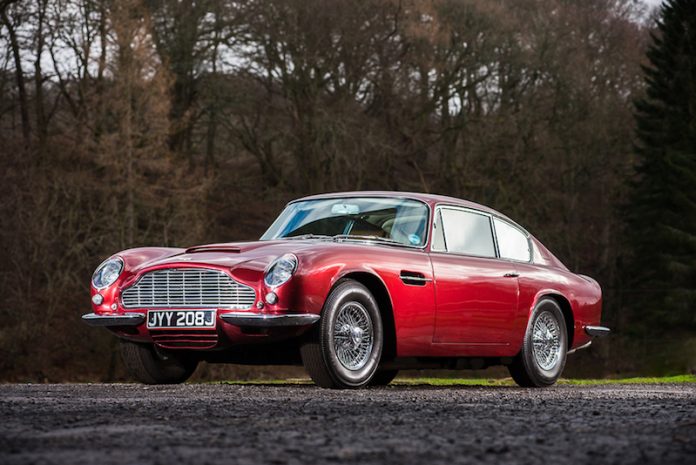 I’m a big fan of Aston Martin, although I think a strong reason for that is my love of James Bond. The DB5 was made famous by the suave super agent, but the model that’s going under the Silverstone Auctions’ hammer in May.

From the front, the DB6 is almost identical, but it’s the rear where the differences can be found. The DB6 rear has a flatter design compared to the DB5 and I must admit it’s a feature I don’t much care for. What I do appreciate though, is the Dubonnet Rosso paintwork which is simply gorgeous on this very rare 1971 example. It’s rare as this is the DB6 MkII Vantage Saloon and it’s one of only 34 ever produced. If that wasn’t enough though, this very DB6 also used to belong to two-time BTCC champion John Cleland. Offered for public sale after 17 years – the car, not John – the car has been loved by 5 owners, which Cleland being the last to enjoy its timeless beauty.

This is a car designed for cruising around Monte Carlo rather than blitzing around the Alps, but let’s mention the engine anyway. Under the perfectly sculpted hood, lays a 4.0 litre straight-six engine which produces 325bhp. 0-60? Top speed? These feel almost irrelevant in a car such as this, but figure you will be yearning to read is the price.

It’s a bit pricey, so I hope you’re sat down. Don’t forget though this is a rather rare car. It’s a rather pricey one as well. The estimate for this very special Aston is between £325,000 and £375,000. Yeah, quite a bit eh? This DB6 will go under the hammer at Silverstone Auctions’ May sale, which takes place at the Silverstone Circuit on the 13th of May. “This stunning DB6 is possibly the best factory Mark II Vantage a buyer can find. The bodywork is in truly excellent condition with some of the best and most consistent shut lines we have ever seen on a hand-built Aston,” explains Nick Whale, managing director at Silverstone Auctions.

“Whilst this beautiful example would make an impressive addition to any international collection, and would surely be welcome at the most prestigious classic car events throughout the world, we can’t help feeling that its best years are still ahead. As one of only a very few factory built DB6 MKII Vantage manuals, it offers a very unique opportunity for Aston Martin aficionados” concludes Nick.