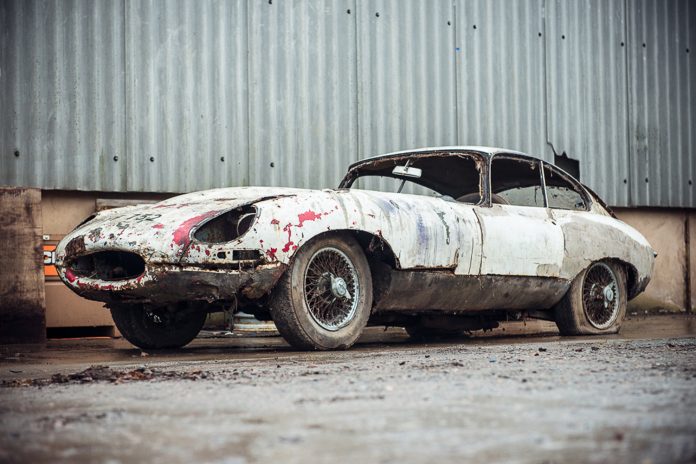 Over the last year or so I’ve written one or two articles about a Jaguar E-Type going to auction. Some have been pretty pristine where as some have been a bit ‘rough around the edges’. None of those in the latter category have been quite as rough as this example, which is to go under the Classic Car Auctions’ hammer.

It make me sad to see a classic car in a state such as this, but at least it’s not completely down and out. This Series 1 fixhead coupé is the perfect buy for someone who fancies a project – plus plenty of time away from the Mrs! This 1962 example was discovered in a barn feeling rather sorry for itself after having been abandoned for almost 20 years.

The car has had two former owners, the second of which had acquired the car back in 1997 but never got around to putting any real work in before moving away from the area. The car was then left by the owner’s brother and kept in dry storage. Now though, it has seen the light of day once more as it prepares to have another shot at life.

The car may look ready for the scrapheap, but it’s still largely original, which is bound to get the arms flailing once it goes to auction. The only thing not quite original is the colour, which at the moment is a dirt coloured white, but was dark opalescent blue when it first rolled of the production line. The car is missing its glassware and its radiator but I doubt that will be a dealbreaker for many.

Despite this car needing a fair bit of work, it’s not what you’d exactly call cheap. The estimate for this TLC-seeking Jaaaag is £38,000-£44,000, which I’m sure you’ll agree is quite a bit of money. However, once it’s back at its best, it will have that E-Type beauty that money simply cannot put a price on.

“These very early E-Types are now highly collectible these days and this example will be a serious project, but one that could be very worthwhile,” explains Harry Whale, classic car consigner at Classic Car Auctions.

“Last year the Jaguar E-Type Series I experienced very significant growth on the classic car market and we expect buyers to be queuing up for the chance to own an example just like, ready to give it the TLC it deserves.”

The car will go to auction at CCA’s at the Practical Classics Car Show which takes place at the NEC Birmingham over the 1st and 2nd of April.