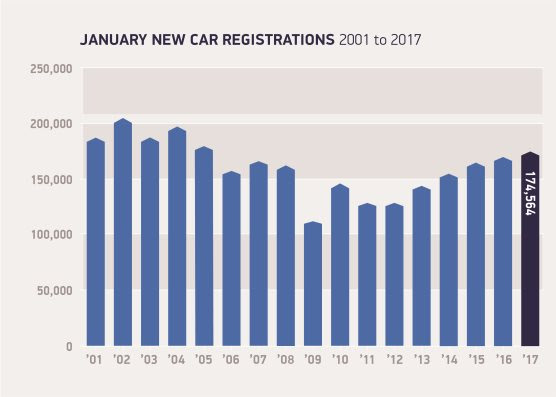 It’s without a doubt that 2016 was a strong year for car sales and it seems as if 2017 is set to follow the same trend. That’s according to data from the SMMT, which has revealed January saw a 2.9% increase on January 2016, making it the highest since 2005. 174,564 new vehicles rolled off dealer forecourts with petrol models leading the race.

Also leading the race – unsurprisingly – is the Ford Fiesta, which carries on its best-selling from of 2016. Almost 8,500 of the popular hatchback have been sold so far, a fair bit more than the VW Golf (5,455) and its bigger brother, the Ford Focus (4,796). In fact the top 10 so far looks very similar to that of last year, showing that buyers’ trends are not set to change anytime soon.

Alternatively fuel has made a notable increase though as the segment grew by a healthy 19.9% to take a 4.2% market share, plus it’s the first time AF fuel vehicles have surpassed 4%. Private and fleet markets grew with respective percentages of 5% and 1.4%, whilst business buyers fell by 1%.

Mike Hawes, SMMT Chief Executive, said, “2017 got off to a good start in the new car market, buoyed by a great range of new models which are safer and cleaner than ever before. It’s encouraging to see alternatively fuelled vehicles benefiting from this positive growth, reaching a record market share. After record growth in 2016, some cooling is anticipated over the coming months, but provided interest rates remain low and the economy stable, the market is in a good position to withstand its short-term challenges.”