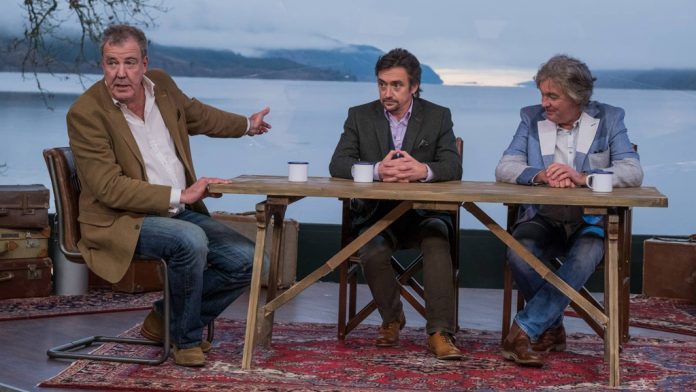 Good evening everyone! Let me first apologise – I’m pretty sure in my last Grand Tour review I mentioned this week’s was the last episode, but in fact after some googling I think there is one more to come. But that is then, let’s focus on now. This week brought episode 12, which once again was brought to us from Loch Ness.

The show kicked off with a car that I’m ashamed know very little about – the Lexus erm what’s-it-called. *checks Google* GS F. Ah-ha, you won’t get that kind of cutting edge reporting from a major publication will you?! Haphazard writing aside, one of the things that made me spit out my drink was the sheer price of the performance saloon. Are you sat down? Good, because the Lexus GS F costs £70,000. Mind you that is a tad cheaper than the BMW M5, but one could get a M4 for that and get a decent amount of change.

Although Clarkson blurted out some gags about the stereotypes of what the normal Lexus driver is, he thoroughly enjoyed sliding it around the ‘Eboladrome’ and the test was mostly positive. I was honestly expecting him to slate it but despite knocking the way it looks – I actually quite like it, am I odd? – the big ape had plenty of praise for the Japanese sports saloon. It was then taken around the track by ‘The American’ who has not grown on me whatsoever.

The main film from this week’s show was a shootout between the butt-ugly but luxurious Bentley Bentayga, the striking Jaguar F-Pace and the middle class favourite Range Rover. The trio start in erm, Wank (yes, that’s a real place) as they make their whistle stop tour to Wedding* via places such as Kissing, Petting and F*cking (again, a real place). Yes there was a fair share of schoolboy gags, which were inevitable and mostly predictable but they were still enjoyable nonetheless. Clarkson was the pilot of the Range Rover, claiming the tests were ‘pointless’ as the Range Rover was the obvious choice.

*That never ended up being as the final destination.

The Hamster meanwhile was in the Jaguar F-Pace, a car I think looks fantastic, no matter what colour you have it in. So through the power of elimination it means Captain Slow was in the luxurious but rather ugly looking Bentley Bentayga which was in excess of £200,000. No, the amount of zeros is correct. This makes Hammond’s F-Pace look like the “bargain of the century” as quoted by him, and you have to say, he made a fair point.

The road trip gave us some lovely scenery and as always, the cinematography was completely on point. There was plenty of banter on tap and there were challenges along the way, including the compulsory drag race, a blitz on the Autobahn (it’d be rude not too), finishing off with a race around a quarry.

Overall, a solid episode – even Celebrity Brain Crash was bearable, but sadly we are coming to the end on what has been an eventful first series of The Grand Tour, which hasn’t always hit the mark, but either way, it’s been so good having Clarkson, Hammond and May back on our screens.