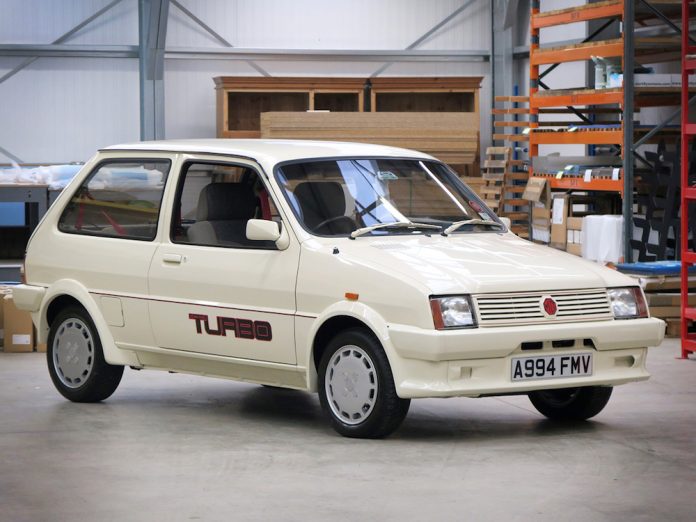 The MG Metro Turbo may not be the most accomplished hot hatch going (or the fastest) but as the number of original models get lower and lower, they are becoming more sought after. Silverstone Auctions is able to offer a very fine example of the aforementioned car, one that has barely been used. In fact I’m staggered about the lack of miles it has done since its 1984 registration.

Despite being older than me, this 80s hot hatchback has covered just 7,317 in the hands of two owners. That’s an average of 221 miles a year! What makes this model even more special though is it was a special factory order, meaning it features a white design with colour-coded bodywork with matching painted wiper arms, mirrors and grille.

Step inside the cabin and you will be met with grey and red cloth seats with a bold red carpet and a sporty steering to boot. Whether you’re looking inside or outside though it’s clear this car has been looked after and it looks as good now as when it left the production line back in ’84. It’s little wonder that this very car won two Concours awards back in the early noughties.

This may be a Metro, a car which is normally as exciting as doing a crossword, but the Turbo had a few tweaks to it to make it spicier. This included design help from Lotus Engineering Racing Technology as well as component such as a 93bhp 1.3 litre engine with a Garrett T3 turbocharger, stiffer suspension, beefed up brakes and a specially designed exhaust manifold. Ok, so it wasn’t quite enough to properly trouble the mighty Volkswagen Golf GTI or the legendary Peugeot 205 GTI, but MG certainly gave it a good shot.

“The condition of this MG Metro Turbo can only be described as ‘show-stopping’,” explains Guy Lees-Milne, general manager, Silverstone Auctions. “Last year we sold a 1989 Peugeot 205 GTI of a similar calibre which soared through its estimate, selling for a new record price of £31,000. This rare, immaculate example is perfectly suited to today’s market.”

The estimate for this Metro Turbo has been set at between £16,000-£20,000 but with so little of this model left, I wouldn’t be surprised if it went for more. The car will go under the hammer at Silverstone Auctions’ Race Retro sale, which takes place on the 25th and 26 of February at Stoneleigh Park.