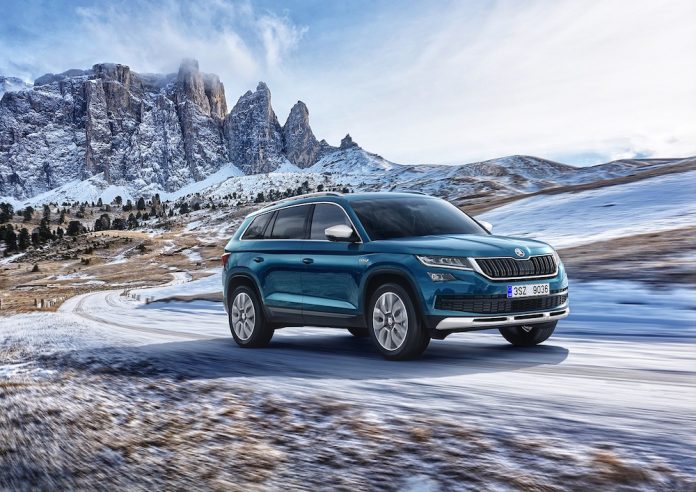 Hot on the heels of the new Kodiaq, Czech brand Skoda will be unveiling the all-new Kodiaq Scout at this year’s Geneva Motor Show taking place in March.

Essentially, it’s just a model variant of the new Kodiaq, the first SUV to come from the Czechs, but there is a little bit more to it than that. Think of it as a normal Kodiaq, but with hiking boots. The Kodiaq Scout, much like the Octavia Scout, is designed to be more robust and outdoorsy than the standard Kodiaq and features its own model specific styling.

Those chunky 19-inch alloy wheels have been designed specifically for this model, as has the front and rear ends. Underbody protection is also in place to make sure nothing gets damaged in the rough and tumble of off-roading, plus each trim comes with four-wheel drive. One of the key things that marks the Scout from the normal Kodiaq is the silver trim which is to be found around the radiator grille. There will be a choice of four engines – two petrols and two diesels. The petrol contingent will consist of a 148bhp 1.4 litre TSI and a 2.0 litre producing 178bhp. In regards to the diesel, there is a 2.0 litre unit which produces two different power outputs – 148bhp and 187bhp. Those looking for power should look at the more powerful 2.0 litre units, whilst those looking for economy should look no further than the 148bhp diesel which is capable of 53.3mpg whilst producing 139g/km of CO2 emissions.

As well as four-wheel drive and model-specific styling, the Kodiaq Scout features equipment to match the SUV’s robust character and is based on the standard Kodiaq’s SE trim. This means buyers will be able to enjoy features such as driving mode select, modular infotainment system with eight speakers, alcantara-covered seats and steel pedals. Off-road assist is also on hand, as are front and rear parking sensors.

The new Kodiaq Scout will be unveiled at the Geneva Motor Show which takes place from the 9th to the 19th of March.