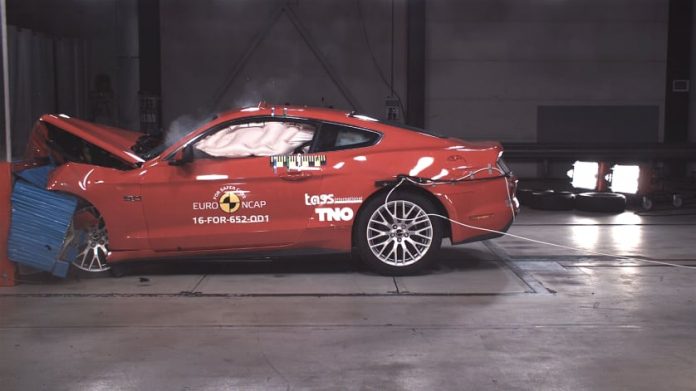 In the modern day new cars are offered with a whole host of safety features such as autonomous emergency braking, lane departure warning, blindspot warning – the list goes on. Even the ultra-stylish Alfa Romeo Giulia was able to earn a five-star rating from Euro NCAP, which I think is pretty remarkable.

Now I wouldn’t necessarily expect the new Ford Mustang to get five stars, but I wouldn’t expect the rating it actually got. The score the famous muscle car was actually two. Yes. Just two. I imagine this won’t be a massive concern for most buyers as it’s a performance car, but it still raises concerns (and eyebrows).

Why Only Two Stars?

One test found that the driver and passenger airbag did not inflate sufficiently to restrain the occupants, whilst another test found there was a lack of rear seatbelt pre-tensioners and load-limiters causes the rear passenger to slide under the seatbelt. This means those in the back will have a higher risk of getting abdominal injuries. The side impact test also found that the dummy acting as a 10-year old child struck the interior trim, rather than the curtain airbag.

“We have not given a Two Star Euro NCAP rating to any of the top 10 car brands since 2008”, comments Matthew Avery, Director of Research at Thatcham Research. “This really bucks the trend. Car buyers are increasingly benefitting from improved safety functionality and features, and this applies equally to cars in the sports roadster category as to family cars. We have concerns about the Ford Mustang’s crash protection of adults and children which also makes it unsuitable for having rear passengers. On top this, it does not have basic life-saving technology like Autonomous Emergency Braking (AEB) that is available even on the Ford Fiesta, and the recently launched Ford Edge.

“What really concerns me,” continues Avery, “is that Ford has made a deliberate choice. The car has been designed to score well in less wide-ranging US consumer safety tests and only minor updates have been made to meet required European (pedestrian) safety regulations. This has resulted in poor adult and child protection scores and the high-tech radar collision warning system that is available to US consumers, not being available here in the UK. The Two Star Euro NCAP rating is the consequence.”

So it looks like you’d be better off safety wise with an actual mustang. However, Ford will be looking to make amends with this when the facelift model comes later this year, which will feature new safety features such as pre-collision assist and lane keep assist.