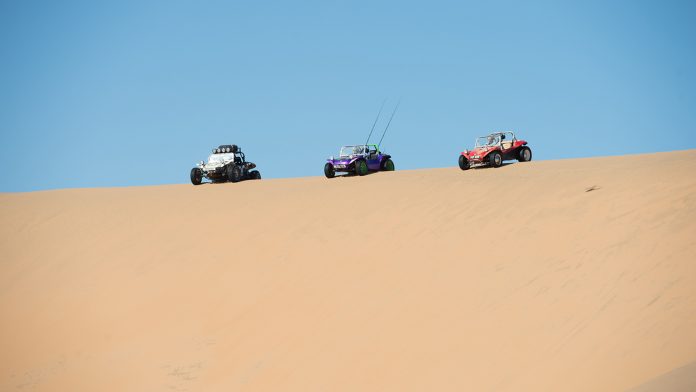 Good Afternoon everyone, sorry the website has been a little quiet over the last few days, I’ve been busy with a few bits, including visiting the Lamborghini Veneno, plus as you can imagine there isn’t a lot of news flying about at the moment.

I was going to review each piece of the new Grand Tour special separately but as there wasn’t a great deal of action in the first part, I thought it’d make more sense just to do one big round-up. So, here goes!

The challenge for this, the first Grand Tour special, was for the troublesome trio to venture across Namibia in beach buggies, cars made famous by the likes of The Beach Boys and the wonderful decade that was the swinging sixties. As you’d expect, Clarkson, Hammond and May had their own visions of what the perfect beach buggy should be.

The outcomes were reasonably predictable, James had turned up in a stock buggy, true to the genetics of the original, whilst Clarkson and Hammond didn’t. In fact Clarkson’s example was finished in a flamboyant purple and green colour scheme, and if that wasn’t enough, he had fitted a V8 engine at the back in place of the traditional VW 4-cylinder unit. Or as Hammond put it, Clarkson had parked the buggy “near a V8”.

Hammond’s beach buggy was more like an oversized dirt buggy with its large suspension, massive rallying lights and spare tyre on top. This all led to the typical bickering about who had done it right and who hadn’t, which was interrupted by a challenge. It was to drive to the beach, which seemed easy as they were already there. However, the beach in question was at the northern part of the country, on the border with Angola, 1000 miles away. What could possibly go wrong?

Beautiful scenes, not a lot going on

The first part was beautifully shot – as was part 2 – but I’ll be honest, I thought the episode was lacking some depth. I hate myself for saying that but I need to be impartial here. All that really happened in the first part was the trio getting lost, sleeping on the cold desert, a bit of fishing and dune battling. I’m not saying it wasn’t good, it just didn’t feel as ‘special’ as some of the old Top Gear specials – it’s still a lot better than the India special though!

The second part brought more action and more laughs as the Namibia trip stepped it up a gear. The trio decide to get some much needed supplies once they make it in to the capital city. Hammond decides to keep it traditional, whilst Clarkson and May decide to make camping more bearable and the result is actually rather something. Think of glamping except the duo decide to hire a butler called Giovanni. Yes. Really.

I’m sure May would have been grateful for a proper bed as the ride in his buggy was bone-shakingly hard. In fact I could almost feel the pain he and the car were going through as he racked up endless uncomfortable miles. There was some light relief though, he and Clarkson decide to gear up to take out poachers to protect rhinos. I’ll be honest, this part of the special seemed a tad farfetched and a bit predictable as I think anyone could tell that one of them would shoot the other.

​​This means Hammond was awoken to find himself hundreds of metres in the air as his buggy was suspended by a helicopter, much to the amusement of the Clarkson and May. Once reunited May has the the idea of driving off-road in a bid for a more comfortable journey. This goes so badly that he gets stuck, Clarkson overheats and Hammond is struck with mechanical problems.

James get his comeuppance though as he ends up setting his own car on fire whilst trying to improve Jeremy’s car and I love the way how May thinks he can put it out right his foot and some dirt on the floor. What a cock. The result of the fire is pretty dramatic and the buggy is almost unrecognisable. It made to the end though, as did Clarkson but it wasn’t as smooth for Hammond who got stuck on the home-made cable car system. ​​All-in-all it was an enjoyable special which took a bit of time to get going in my opinion but it was well worth it and as with the other Grand Tour episodes, the cinematography was astounding. The visual team have worked wonders and the scenery alone makes it worth watching. However I don’t think it’s the best special the trio have produced but it’s certainly a good starting point for their Grand Tour venture.

I would have liked to have seen some challenges along the way and the rhino bit was just a bit too ‘out there’ for me but as I said earlier, it’s still miles better than the godawful India special. Happy new year everyone!