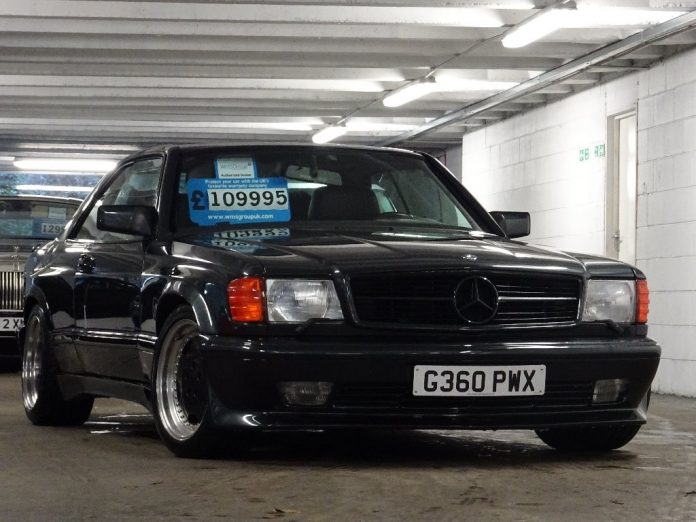 It may be Christmas tomorrow but there is just enough time for one more WWS before the big day is upon us. The car I’ve picked out tonight caught my eye, simply because it looks completely badass. It’s a left hand drive 1989 Mercedes 560SEC AMG fitted with a hammer widebody bodykit, which is one of just 50 in the world. So it’s mean and rare? Me likey.

It’s also rather pricey; £109,995 is the asking price by Motorhub, the dealer that is selling this German gangster. Under the bonnet is a 6.0 litre V8 engine which is able to offer a meaty 385bhp, which is mated to an automatic gearbox. 0-62mph comes in around 6.0 seconds and this blacked out coupé will rocket to a top speed of 160mph.

As well as a beefed up engine, AMG tweaks include suspension, sports exhaust and styling such as the Recaro leather seats and an AMG steering wheel. As you’d expect from Mercedes there is plenty of luxury as well, including the aforementioned leather seats, which are electronically adjustable as well as being heated.

The exterior has also been given the AMG treatment which is clear to see, the widebody and the AMG rims along with the blacked out badges produce a look that Jeremy Clarkson would describe as a “symphony of evil”. It will be pretty evil to your bank balance as well with that hefty price but bear in mind it’s covered just 16,797 – that’s just 658 on average a year.

For more details head to Auto Trader or Motorhub.