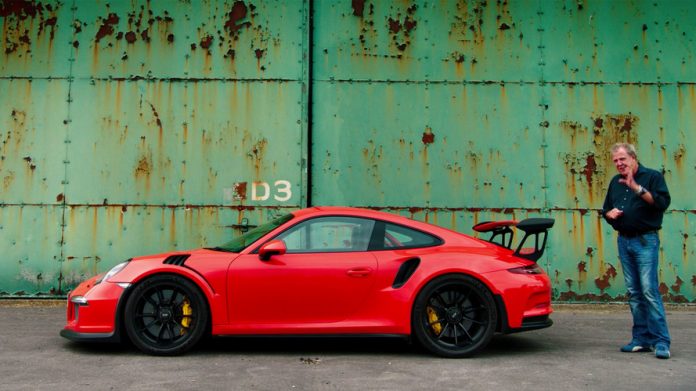 It’s been a long, busy and rather stressful week so it was safe to say I was in need for a good laugh. My word, was The Grand Tour able to deliver, and then some. Now I’ll be honest there wasn’t much actual ‘car stuff’ and it was packed to the brim with gags. Don’t worry though, it’s not the disjointed, awkward humour delivered in episode 2; these gags seems much more natural and organic.

Speaking of organic, let’s get started with the main film of the show. Stop reading here if you want to avoid spoilers. The trio set out to build cars that are more ecological to make and more sustainable than the cars currently on today’s market. Yeah, I know, this doesn’t sound like something Clarkson, Hammond and May but it turned out to be a very funny – albeit a bit aimless – video.

​​The three met up in a field in Wales with Land Rover Defenders that had been stripped of their heavy, non-eco friendly steel panels with something a bit more natural. James May is the first to arrive (for once) and his car is literally a block of mud, but before he can talk us through, Richard Hammond arrives in what looks like a mobile garden. Well I suppose it was come to think of it. May and Hammond are then joined by Clarkson who has been predictably obtuse and turned up in a car made of bones and the remains of a cow. No, I’m being deadly serious. ​​Before the trio had even started May’s car had pretty much disintegrated, giving me a massive belly laugh in the process. This pretty much set the tone for May in this clip and Clarkson didn’t have the best of luck either in his BMW (Big Meat Wagon) as that attracted dogs, flies and maggots. Hammond seemed to fair best in the challenge, despite an accident with an industrial hedge trimmer and some external combustion later on…

There were some cars in the episode though, namely the Porsche 911 GT3 RS and the BMW M4 GTS. Clarkson took both German sportscars on to the ‘Eboladrome’ to see what was what and I was surprised with Clarkson’s thoughts. We all know he’s not a massive fan of the 911 so I was expecting the M4 GTS to walk away with an easy victory but Clarkson found the latter too twitchy and too unpredictable. ​​The GTS looked like it was much more fun to drive but going sideways is not the fastest way to get a quick lap time and that rang true once it was in the hands of ‘The American’. I’ll be honest, I’m still not keen on him – spoiler alert, I don’t think I ever will be – and it would have been great to have seen the return of Ben Collins, but never mind. Anyway back to the lap times; the M4 GTS was two seconds slower which doesn’t sound that bad but you’d given the close performance figures.

Good conversations and another celebrity death

Conversation street is a section I really enjoy but as a fan of the ‘news’ section of Top Gear this comes as little surprise. I’ve always liked this section because of the banter and it really makes the chemistry apparent. Topics of conversation included the new Ford GT, plus peculiar traffic lights in London.

A section I don’t enjoy is the whole drawn-out celebrity death sketch. I am not the only one who has that view so I don’t understand why the show insists on persisting with it. especially as it was only a bit funny last time and there’s only so many times I can hear James May say “Does that mean he’s not coming on then?” Please guys, make it stop. Oh it was Jimmy Carr that got killed off this week, in case you were bothered.

All-in-all this week’s episode made me laugh out loud many times although I feel it may not be for everyone, particularly The Guardian, which slated it. C’mon guys, get a sense of humour! There was a lack of cars in the show but it was the three doing what they do best, cock about and cause mishaps. Think of it as episode 2 with better gags…