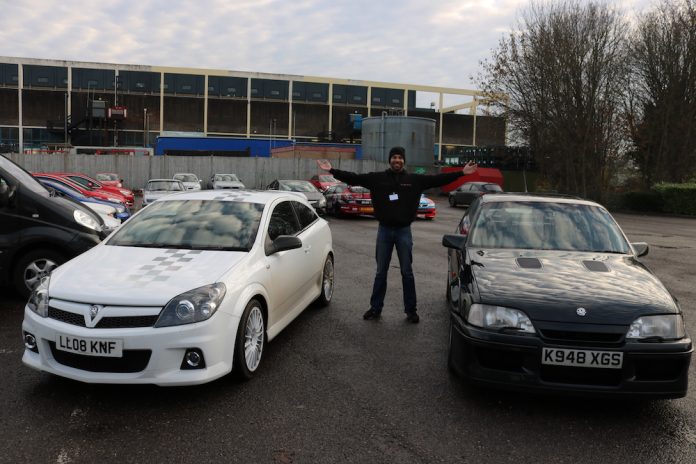 Today I attended a Vauxhall test day, which took place at the brand’s Heritage Centre in Luton and my word, was it worth the trip. There was a selection of the brand’s current cars but with it being a heritage centre, there was some models from yesteryear there as well. Well in fact, there was dozens, and best of all, a handful of them were available to drive. I was able to drive two of them, plus three of the current models. Let’s get started! The car I most wanted to drive from the day was the legendary Lotus Carlton, but as someone was just able to pip me to getting the keys, I had to ‘settle’ for the Astra VXR Nurburgring. I know. bummer right? Finished in white with matching alloys and a chequered flag motif running across the car, you know this is something a bit special. So special in fact that only 835 were produced.

Why 835? This was to celebrate the time this car set around the Nurburgring, 8 minutes 35 seconds, in the hands of Manuel Reuter, a man who won the 24hr Le Mans race. Twice. The model tested was number 645 and like the others features a 2.0 litre engine which produces 237bhp and 236 lb/ft of torque. It’s mated to a six-speed manual which will help propel this pocket rocket to 0-60 in 6.2 seconds and the top speed is a rather racey 152mph.

Push the start button and the Astra grumbles in to life and boy does it sound good. The seats are very well padded and deep, offering a high level of support. Finding a good driving position was easy although I felt like I was sat a bit high up but it didn’t affect my drive. The steering has a lovely weight to it which is something my Ibiza FR could do with. I couldn’t detect any real torque steer, which is impressive considering it’s not the newest hot hatch and it’s got a fair bit of grunt being fed to the front wheels.

Acceleration is effortless and the turbo spools up with no lag I could detect. This coupled with the lack of torque steer makes the drive more enjoyable and engaging, although I know some people like a bit of torque steer. Speaking of steering, let’s get on to handling. The Astra VXR grips road really well although I did detect a tiny bit of body roll, but that’s being overly critical. Overall it was cracking car and if I’m honest I was expecting to finding a few things to criticise as I wasn’t a big fan of the Corsa VXR I tested a few years ago. Here we go… The big one. This was the car I was most looking forward to and here I was, with the keys. I was like a pig in – well you know the expression. This is a rare car, just 320 came to the UK and it’s thought there is only about 150 left on the road. So you may be thinking “what’s so special about an old Vauxhall saloon?” Well Vauxhall sent its four-door saloon to Lotus for it to be tweaked and fettled, boy were the results dramatic.

The 3.0 litre engine was increased to 3.6 litres and if that wasn’t enough Lotus decided it would fit TWO turbochargers on for good measures. This meant a power output of 377bhp with 419 lb/ft of torque mated to a six-speed ZF manual gearbox. This made the performance figures rather dramatic – 0-60 comes in 5.4 seconds and the top speed is no less than 176mph. It’s no wonder that this was the fastest four-door saloon in production at the time.

But enough of that, let’s get driving. Start up the 3.6 litre engine and it doesn’t make a show or bark like the VXR did but it gave you an inkling of what was lurking underneath. The driving position was rather odd as the pedals are a bit offset to the right and the steering wheel was resting on my thighs. I then realised halfway through the drive that the steering wheel could be altered…. Whoops.

The odd steering wheel was not the first thing I noticed though – the clutch is VERY heavy. Now, I’ve never driven a piece of heavy machinery but I imagine the controls would be similar to the Lotus Carlton. Getting used to the clutch did take some time and I only stalled it… a few times. The gearbox is heavy as well and this really is a car to be driven, you need to work at it, but that’s not a bad thing – it’s engaging. One thing you don’t have to work at though is the acceleration as this thing takes of like an absolute rocket!

The steering had a nice weight to it and I found it did a rather nice job although others have said that the steering is lifeless. There’s plenty of grip on offer although the body roll is noticeable though. The brakes aren’t exactly sharp either, but that could be down to age. Despite these small criticisms this was a drive that will stay with me for a very long time and I am so glad I was able to have this opportunity to drive a motoring legend. Fancy one? Well there are two on Auto Trader for £20,000…