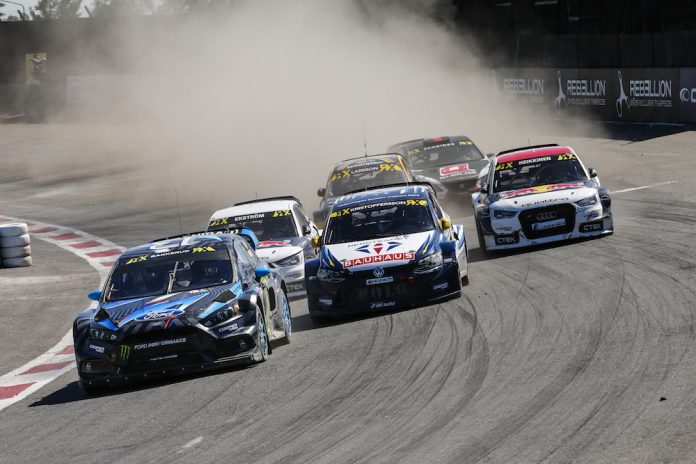 This year has been my first season of watching FIA World Rallycross and I have to say I have thoroughly enjoyed it – this week’s race was no different.

Going Out With A Flurry

The season finale took place in Rosario, Argentina and it’s a place where you’d expect some decent weather surely? Erm, not quite. Qualifying 1 was a wet affair with drivers struggling to get fast times and get acclimatised to the wet track, but that wasn’t enough to stop outgoing champion Petter Solberg. The Norwegian took the bull by the horns early on and showed everyone that he was not going out without a fight.

The weather didn’t get any better and it got so bad that Q2 has to be pushed back, leaving drivers and teams frustrated and kicking their heels. The break in play appeared to be no problem for Solberg though – he was able to win qualifying 2 as well, setting a good pace in the process. In Q3 Johan Kristoffersson set the fastest time of the heat with a time of 2:52.745 in race 3 but that was soon smashed by Solberg with a time of 2:46.271.

​​In fact Solberg was able to make it a clean sweep in qualifying as he was able to guide his Citroen DS3 to an impressive time of 2:37.362 in Q4, making him top of the pile. It looked like he was going to race the perfect weekend like Andreas Bakkerud did earlier in the year but as you’ll soon see, it wasn’t to be.

The Race For Team Title

The driver’s championship may have been sewn up but there was still plenty to compete for. The team’s title was yet to be decided though and it was a straight shoot-out between Team EKS and Team Peugeot-Hansen and it looked like it was going to go down to the wire. However, it was practically given to Team EKS on a plate after Team Peugeot-Hansen’s Timmy Hansen put a disappointing shift in qualifying and therefore did not make the semis, giving Team EKS the team’s championship in the process.

Petter Solberg was on pole position in semi-final 1 and it seemed to be his race, especially after new champion elect Mattias Ekström jumped the gun at the start and had to do two jokers as a result. However, Solberg hit problems after one of his front wheels decided it didn’t want to turn anymore and with his turning inwards he could only guide the car around to the finish line but even this presented problems.

He hit a tyre wall after his car wouldn’t turn in properly which completely smashed the front bodywork off, making the car almost unrecognisable. He was unhurt and able to finish, but it was clear he was not happy as this meant he had no chance of making 2nd place in the driver standings.

Andreas Bakkerud has had a decent season in the brand new Ford Focus RX and after his impressive drive in semi-final 2 he lined up in the final on the front row. He was also able to take the Monster Energy Supercharge award after he made a good start and steamed down to turn one. Both EKS drivers were in the final too, so this meant they had to drive a bit conservatively to make sure they didn’t take each other out, even though the team’s championship title was already theirs. Heikkeinen was able to pip his teammate to the finish though, after a tight overtake following a joker lap.

​​Bakkerud held on to his lead and was able to take his third win of the season with Johan Kristoffersson taking second and Toomas Heikkinen taking the last spot on the podium. The second place for Kristoffersson was enough to put him in to second place overall which made his father who was watching on from the spotter’s stand rather emotional. Ekström finished with 272 points, Kristoffersson with 240 and taking third was Andreas Bakkerud with 239 points – Solberg had to settle for fourth (also with 239 points). Team EKS took the team championship with 422 points, a long way ahead of the 382 points taken by Team Peugeot-Hansen

There we have it, another World Rallycross season is done and as my first, I really enjoyed and I look forward to next year!