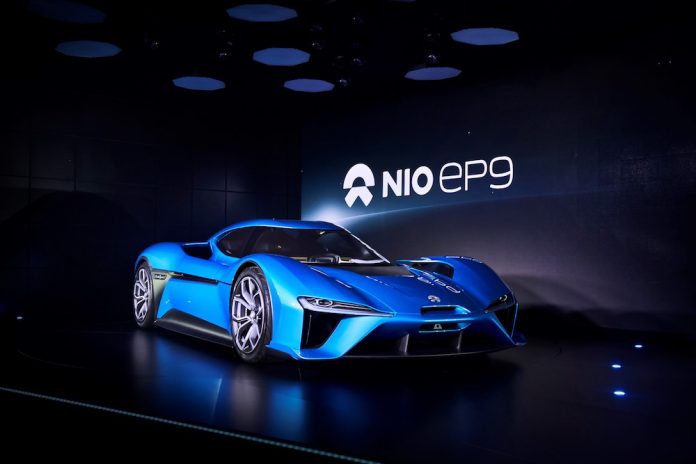 Now if you’re a frequent reader you’ll know that I’m not completely sold on electric power, in short I don’t think it’s the best option long term. However it does still have a valuable place in the motoring world and it can be rather exciting. Step forward the NIO EP9.

Ok, so the name is not overly sexy but the sleek, low-slung design more than makes up for that. Now if you’ve never heard about NIO, its a brand from a Chinese electric car company called NextEV which also makes Formula E cars. So it’s far to say the team there know a thing or two about making a fast electric car.

With this experience the Chinese brand has been able to an electric supercar that is simply electrifying. I’m sorry, I couldn’t resist. The EP9 currently holds fastest time around the Nürburgring with an impressive time of 7 minutes 5.12 seconds. That’s three seconds faster than a Nissan GT-R Nismo! It’s also been able to smash the EV (Electric Vehicle) Circuit Paul Ricard track record of 2 minutes 40 seconds with a new time of 1 minute 52.78 seconds. Under the EP9 lies four high-performance inboard motors and FOUR individual gearboxes. This setup is able to offer a HUGE amount of power, 1,342bhp in fact, making it the fastest electric supercar in the world. It will get to 200km/h (124mph) in just 7.1 seconds – yes, you read that right – and it will continue on to a top speed of 194mph.

It will charge almost as quickly as it drives as well – 427km of range can be achieved with just 45 minutes of charge. The battery is also interchangeable, so if you happened to have a spare one lying about you could simply out the dead battery for it. The clever engineering doesn’t stop there though, the carbon cockpit and chassis has been designed specifically to enable the EP9 to survive cornering forces of 3G and there is 24,000 Newtons of downforce at 240kph (149mph). I’m no expert but I’m pretty sure that’s a lot! ​​NextEV Founder and Chairman, William Li, said: “Today we launched our electric supercar that broke the record at the Nordschliefe. The NIO EP9 was born to push limits and is the first stage of automotive production for NIO. It is a statement of our vision and technical and manufacturing capabilities. It is a best-in-class product that showcases what is possible with electric vehicles. We believe that when the car ownership experience exceeds expectations, electric vehicles will become the natural choice for everyone, leading to a more sustainable tomorrow. And with that, our vision of a blue sky will come true.”