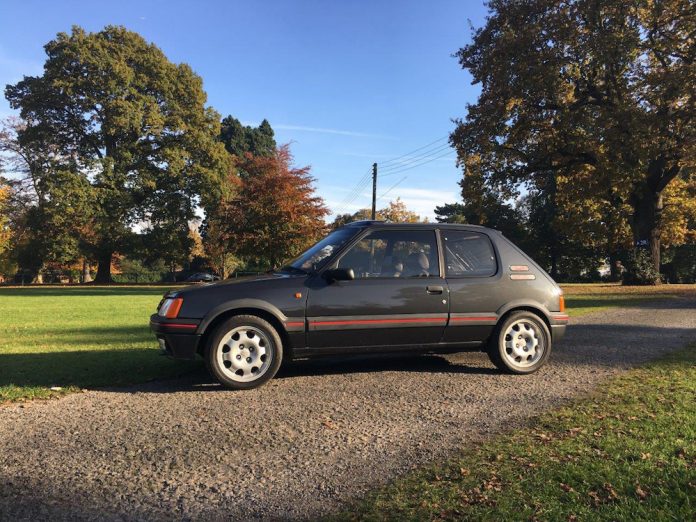 The Peugeot 205 GTI is a hot hatch legend that is adored and lusted over by many in the motoring community. The thing is that there isn’t many of them on the road and trying to find one to buy can be even harder. However, if you are looking for a 205 GTI then good news! You have a choice of three.

Classic Car Auctions is able to offer not one but THREE Peugeot 205 GTIs in its December sale taking place at the Warwickshire Exhibition Centre. The question is will any of these be able to match the world record price of the 205 GTI sold by sister company Silverstone Auctions earlier this year?

The first example on offer is a 1989 1.6 litre model finished in black and the youngest out of the three. Its been worked on cosmetically and mechanically but even so, the estimate is lower than you may have expected. Well it’s lower than I expected anyway. The estimate price is £5,000 to £7,000 and it’s a good thing I don’t have access to that kind of money because I would be seriously, seriously tempted. The second example is a little older and comes from ’88. It may be a little older but it’s got more go as this has the 1.9 litre engine under the bonnet which offers 22 more horsepower. It’s also finished in black and it’s also been given an overhaul after belonging to two owners. The car comes with all original and no reserve, so in theory it could sell for peanuts. It won’t but you never know… “The 205 GTI is the holy grail of hot-hatches, possibly the ultimate modern classic, and we have not one but three up for grabs at the December Sale,” commented Guy Lees-Milne, auctions manager at CCA. “Over the past year we’ve seen prices soar, and iconic hot-hatches are firmly cementing their place in the classic car market. Sooner or later the 205 GTI will achieve full, classic status.”