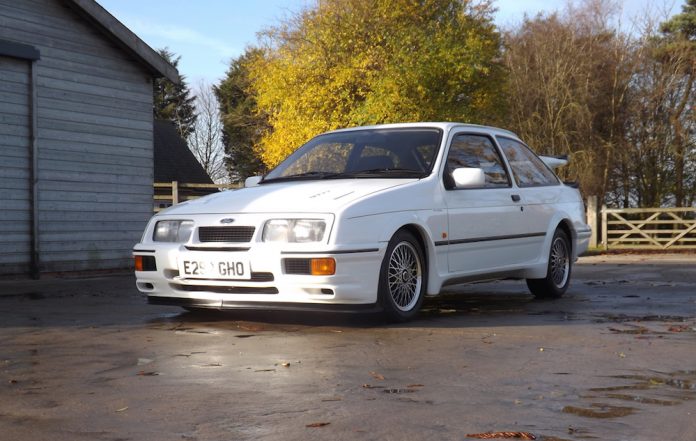 If you ask any hot hatch owners from the 80s about the Ford Sierra Cosworth RS500 and they’re likely to pause before saying, “good car that” – probably. The 80s awash with hot hatches, most of which probably ended up nicked or overturned in a field.

The Sierra Cosworth is with no doubt one of the most iconic cars of its era but there aren’t a great deal of them left. However, you’ll have the chance to buy a pristine 1987 example which has spent a good deal of its life on the other side of the Atlantic.

This right-hand model was first sold in 1987 but it was then sold on to its second owner the next year, having covered just 2,000 miles. It was used now and then until 1995 when the owner emigrated to the United States. Don’t worry though, five years later he had the car shipped over to him after it had been kept in the appropriate storage.

​​Sadly though, he wasn’t able to get the car registered in the States and with a heavy heart, he had no choice but to ship it back to Blighty after he was unable to sell the car in the US. Since then the car has been given a light restoration by performance specialists Graham Goode Racing and is now available to buy at auction in Classic Car Auctions’ December sale which takes place on the 3rd Warwickshire Exhibition Centre.

It’s presented with just 12,000 miles on the clock with full documentation, including the work carried out by Graham Goode Racing. What you’ll also be getting is a 2.0 litre four-cylinder engine which is able to produce 224bhp, which is mated to a five-speed manual gearbox.

“This sparkling, low mileage Cosworth RS500 is an absolute must for the astute collector,” comments Guy Lees-Milne, auctions manager at CCA. “Cars of the 80s and 90s are some of the fastest rising modern classics in the current market, and the appetite for well kept, low volume Fords in particular, shows no sign of abating. A buyer would be hard pushed to find another pristine example with 12,000 miles!”