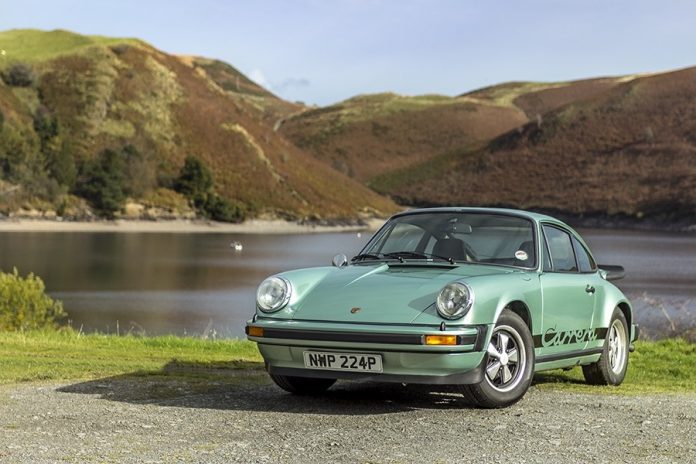 Classic Porsches are rapidly going up in value so if you happen to own one in good condition hold on to it as I can only imagine the value will go up. Although I am not an expert in classic car selling so you’d be a fool to take that as gospel. However, this rare 1975 911 Carrera 2.7 NFI Coupé is a good example for what I’m on about.

Just 21 of these models were produced, this example was purchased on the 13th of November in 1975 by its first owner in Stourbridge and was driven for 33 glorious years. Powered by a 2.7 litre air-cooled six-cylinder engine, this classic 911 is able to get to 60mph in around five seconds and on to a top speed around 150mph. It was taken of the road in 2008 however having covered 55,500 miles.

It was sold seven years later by Silverstone Auctions for a grand fee of £146,250 – £50,000 more than its lower estimate. The new owner set about restoring the rare model to its former glory band took it to specialist Porsche restorers RS 911. Other than the two new front wings and a few perishables, the car has remained completely original, plus the engine and gearbox has been rebuilt by Tech 9 Motorsport in Liverpool. ​​The suspension, differential and electrics have also been restored, as well as the interior, which simply needed cleaning up and restitching. Now the car is finished it’s set to be auctioned by Silverstone Auctions once again but before then the current owner hopes to reunite the classic motor with its former owner one last time. It will then go under the hammer at The Classic Car Show on the 12th November for a whopping estimate £240,000-£280,000 – almost double what it sold for last year.

“The results of this restoration must be seen to be fully appreciated. ‘RS 911′ have done a fantastic job, the engine sounds superb, and this 911 can now be returned to the road in its former glory,” comments Will Smith, sales manager at Silverstone Auctions.

“I expect the car’s first owner to be absolutely awestruck to see his 911 returned to the condition it was in the day he bought it, and there will be no lack of interest from Porsche collectors on auction day for such a low ownership, low mileage, rare classic like this one.”