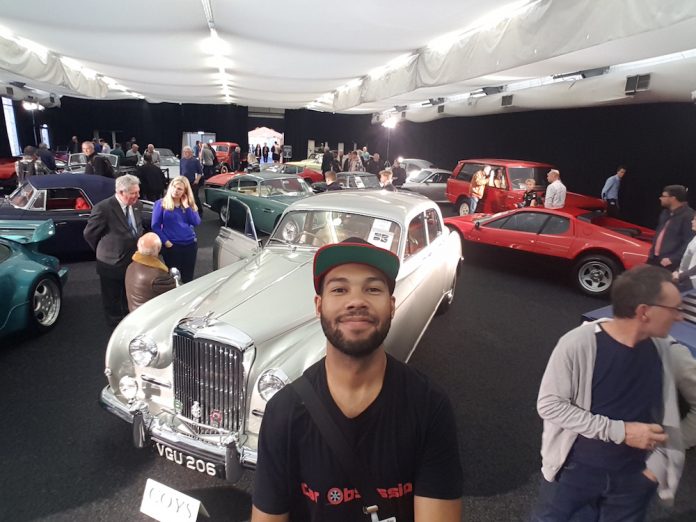 Yesterday I attended the Classic and Sports Car Show for the first ever time and I must say it was an enjoyable day. That’s the reason the site has been a bit quiet for last day or so but hopefully this should make up for it.

The venue was Alexandra Palace, otherwise known as Ally Pally, a place I’d never been to before. I made the trip to the north of London from the South and thankfully the journey wasn’t too bad. It was also a good opportunity to test the Vitara S through the streets of central London. Having climbed the steep hill and then the stairs in to the entrance I was greeted by the wonderful Jaguar XJ13 – the car famously crashed by Jaguar test driver and legend Norman Dewis OBE.

Taking in the scenery

As you can imagine there were lots of lovely cars to look at and I know it’s a cliché but i really did feel like a kid in a sweet shop. It was such an eclectic mix of interesting cars and I’d like to think that even a person with very little interest for cars could find something of interest. I walked in to the first hall and was instantly greeted by a collection of Aston Martins – a very good start indeed.

​​Moving past those I came across the area where the Jaguar Xk120 was being restored over the weekend, one of the events I had been looking forward to the most. In fact I wrote an article a few months back, check that out for more details. Before I knew it I was in amongst the COYS auction cars and quickly beginning to feel desperately poor. To make me feel better I headed outside to see the live parade of Jensen Interceptors and also the 6-wheel Tyrell race car.

A Century of Supercars

One of the other exhibitions I was looking forward to was the ‘Century of Supercars’ which was a display from the best and most famous supercars stretching from 1914 all the way through to the modern day. The reason why I was so excited about this was because it meant for the first time I’d be getting up close to cars like the McLaren F1, Ferrari F40 and the Lamborghini Miura – cars that are simply legends. A vote had been cast to find out which was the ‘Greatest Supercar Ever’ and the F1 was able to win, scooping up around 30% of 17,000 votes.

Some time ago I wrote about the Aston Martin DB7 Zagato but I never thought I’d get to see one in real life so soon after writing the article. My luck was in though as there was parked in the other exhibition hall along with a rather fetching cream DB5. The DB7 Zagato looked wonderful in real life and you can really appreciate the double bubble roof and the sumptuous interior. Needless to say it was a pleasant surprise.

I was hoping to stay for the auction as there were some lovely cars going under the hammer including a Lamborghini Miura that once belonged to Rod Stewart. I do know how much it went for though and that was a staggering £909,000. Other cars to be sold included a Aston Martin DB5 with just one owner which sold for £450,000 and a Ferrari 246 GT Dino which sold for £371,000.

It was a fantastic day and I really enjoyed seeing so many wonderful cars in one location. I look forward to next year and if you fancy seeing more pictures I will be putting them on to my instagram over the next few days and a video of the day can also be found here.