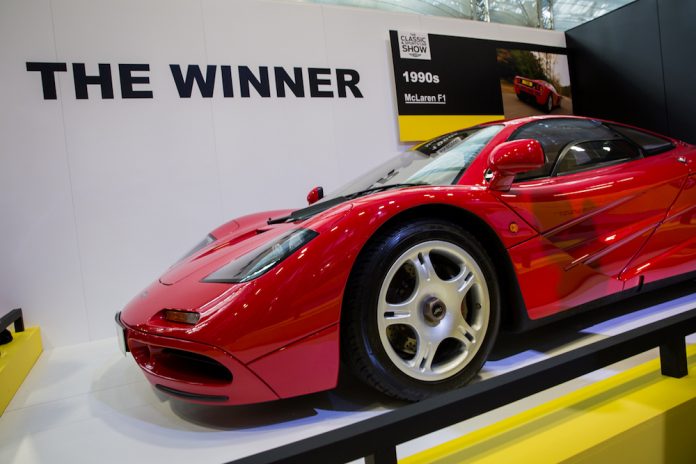 It goes without saying that the McLaren F1 is one of the true motoring icons and only those that have no interest in cars will fail to recognise when they see one. I’ve never actually seen on in the flesh and but that is a day I very much look forward to. The notable points of the British build hypercar are of course the three seat layout, the engine bay lined in gold and oh yeah, it was once the fastest car in the world.

With facts like this it should come as no surprise it’s been voted as the ‘Greatest Supercar Ever’ at this year’s Classic and Sports Car Show. A show which I will be attending tomorrow in fact, I would have liked to have attended today (especially as Norman Dewis was signing books) but unfortunately tomorrow is the only day I can make. So look out for that report, there may even be a video as well, if all goes to plan.

​​The list of cars started at 33 before it was whittled down to 11 at the end of September with that final 11 representing its decade of birth. Cars all the way from the Mercedes 1908 GP (up to 1914 group) to current hypercar McLaren P1 had the chance to win the coveted prize of ‘Greatest Super Ever’.

Almost 17,000 votes were cast and the iconic F1 was able claim over 30% of votes. The car was famously designed by Gordon Murray and was unleashed on the world in the early 90s. It was powered by a 6.1 litre V12 engine which was able to produce 672hp, meaning it was able to hit a top speed of over 240mph, making it the fastest car in the world.

James Elliott, Classic & Sports Car magazine group editor, said: ‘The F1’s top speed ‘record’ of 243mph – with the rev limiter removed – grabbed headlines at the time but it’s the single-mindedness of the whole design that’s still the most remarkable thing about this all-time great. There is no supercar before it – or since – that has such purity of purpose. The F1 has it all: it’s the most uncompromising car ever made, and a fitting winner of the public vote.  I hope visitors to Alexandra Palace enjoy our ‘A Century of Supercars’ display as much as we’ve enjoyed putting it together.”