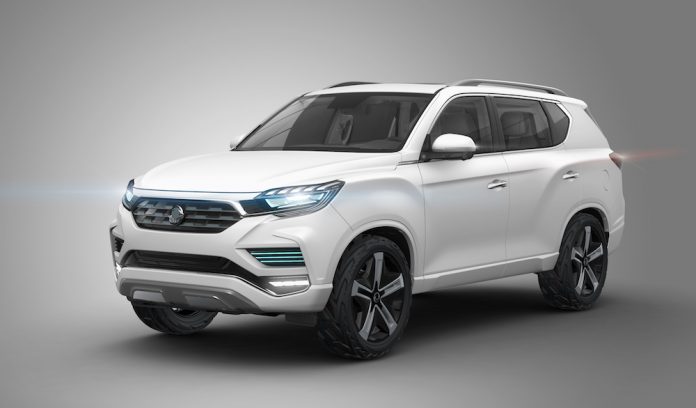 This was actually unveiled last week but due to the splurge of news from the Paris Motor Show I’ve got a bit of a backlog! The LIV-2 SUV concept was one of the many cars to be unveiled in the French capital, a car which SsangYong’s says helps communicate the concept of ‘Dignified Motion’. No I’m not really sure what that is either – maybe walking without falling over?

Expected to come in 2017, the LIV-2 is a large premium SUV which will be powered by either a 2.2 litre diesel or a 2.0 litre petrol. Both engines will power all four-wheels and can be mated to either a 6-speed manual or an automatic transmission with 6 or 7 speeds. The 2.0 litre is the most powerful out the two, offering 222bhp whilst the diesel is able to offer 179bhp. Fuel consumption figures are yet to be announced by the Korean brand.

The new LiV-2 will be home to more safety kit than you shake a stick at, including nine airbags, AEB, Traffic Safety Assist, high beam assistance, lane departure warning and rear cross traffic alert. The Traffic Safety Assist helps to avoid potential collisions at blind spots or intersections whilst the rear cross traffic alert protects the rear of the vehicle when reversing out of a parking bay.

The inside features leather with a Geonic pattern contrasted by piano-black gloss panels. A 9.2″ screen can also be found on the dash which is joined by two 10.1″ monitors installed n the headrests of the front seats. This infotainment system can also be controlled from a centre console in the second row of seats. Premium sounds quality is also offer by the new concept as well as wireless phone charging, a feature that is rapidly making its way in to the cars of today.

Prices are yet to be confirmed but the car is expected in 2017.