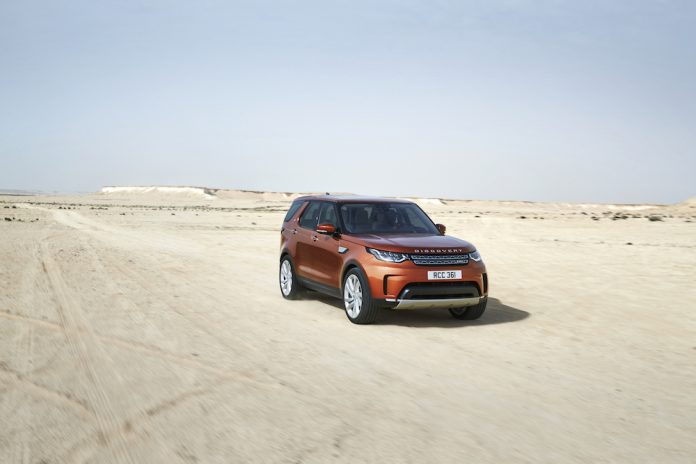 The new Land Rover has been one of the main talking points of the Paris Motor Show as it was unveiled in spectacular fashion with the help of Lego, Bear Grylls, Zara Phillips MBE and Sir Ben Ainslie. The fifth generation marks a new direction of design for the Disco as it’s broken from the square-lighted shackles from previous models.

One of the main headlines of the new model other than the dynamic styling is the new four-cylinder engine and diet. There has been a significant weight saving process which has led the new model to lose 480kg thanks to a lightweight aluminium construction. A new four-cylinder unit is also available to offer better economy. It’ll offer 237bhp with 500Nm of torque and will offer economy of up to 43.5mpg. Don’t think the Disco has gone soft though – it’ll still do the business off-road and it has the best-in-class towing capacity (3,500kg).

The new Disco offers a bundle of kit to keep occupants connected with up to nine USB ports and a 3G wi-fi hotspot is available. You can even move the seats around using a touchscreen or if you prefer, it can be done using a smartphone app. So you can be in a shop paying for your goods and getting the cabin ready and setup for your return to the vehicle. A large 10″ touch display also features in the cabin and has helped the Disco shed the buttons to declutter the cabin.

Land Rover is keen to point out that ALL seven seats are accessible for adults and they’re all heated, depending on what trim you go for of course. The front row of seats also offer a massage function to help sit back and relax…Just don’t fall asleep. The seven seats are staggered, like in a cinema, to ensure everyone inside is able to get a decent view of the journey. They’ll be plenty of room for luggage – the new Disco is able to offer up to 2,406 litres, enough to fit plenty of outdoorsy kit.