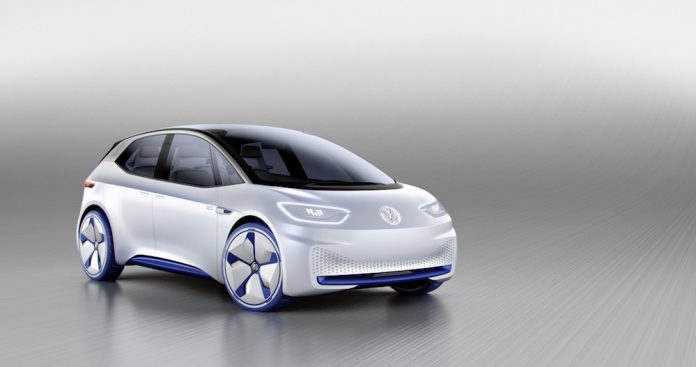 Volkswagen has been well known for giving cars to the people, cars such as the Beetle and the Golf – the name even means ‘People’s Car’, but I’m sure you already knew that. What has this go to do with anything? Well, the German brand has now unveiled it’s next car for the masses, only this time it’s electric.

The first of many?

The new concept is called the I.D. and will act as the spearhead for VW’s new fleet of electric vehicles. The predicted release will be 2020 with prices around the same as a well spec’d Golf. Not only is it electric but it will be fully autonomous from 2025, the same year VW hopes to have sold a million electric vehicles by.

The I.D. is powered by a 125kW (168bhp) electric motor which VW claim will proved 400-600 miles range – impressive. Its built on a new platform which has been specifically created for pure electric vehicles only. VW certainly has a lot of faith in this car as it states it will be just as influential as the Golf and the Beetle before it and will help electric cars become an ‘everyday choice’ for consumers. Sorry VW, I’m petrol through and through. The idea is that every Volkswagen owner in the future will have their own personal VW individual profile so when they step in to the I.D. the car will know who is driving. It will then adjust the settings – such as air con, radio station, etc. – to meet the driver’s personal tastes and requirements. The profile can be accessed securely via a cloud system and will be compatible with a smartphone.

It’s autonomous too so if you don’t fancy driving all you need to do is press the VW logo on the steering wheel and then hey presto, the steering wheel itself disappears into the dashboard and you’re free to put your feet up. What’s even more clever is that the I.D. is able to receive parcels when are you not home, although still probably won’t stop Royal Mail leaving one of those ‘Sorry, you were out’ cards…

It can even find a parking space all by itself which will come in very handy for those busy shopping trips. The door mirrors and B-pillars have been abolished in the new I.D. thanks to technology and doors that are able to form a protective shell when closed. Oh, the rear doors backwards as well which is pretty cool. The I.D. has a party trick up its sleeve whereby it’ll put a small light show when it’s been ‘woken up’. This will start with the transparent VW logos lighting up in white, then blue lighting around the whole car before the car’s headlights turn on and lights our shone in the four door handles. This sounds cool but may prove tiring on a wet winter’s day when you just want to get car with no fuss.

The I.D. also has different lighting for different modes such as charging, normal driving, autonomous driving and last but not least, another small light show when you stop the car running. Again, a nice novelty but one that will probably wear of rather quickly. VW has designed the I.D. to have ‘Open Space’ to give the concept a spacious and airy feel to the cabin. Thanks to longer wheelbase the I.D. will have plenty of space for four but the rear seats can be folded down completely to give a larger (and flat) loading area of up to 960 litres. VW has turned its head towards nature which is by no means original from a carmaker but the German brand has stated the interior is rethought and redesigned.