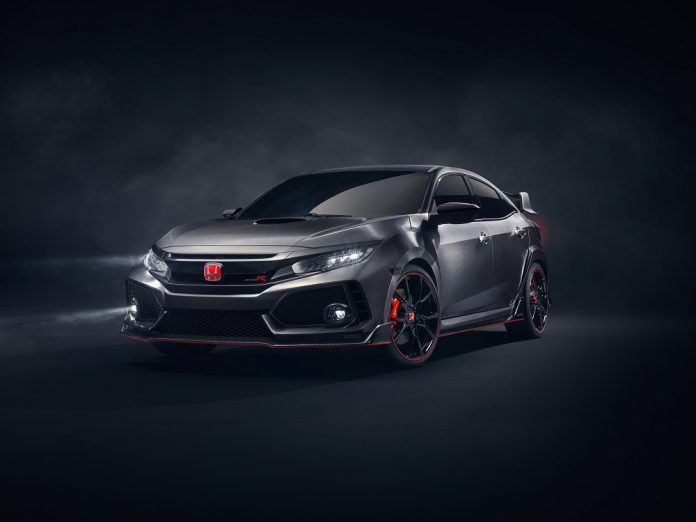 Well, the prototype has been unveiled and as a hot hatch fan I am very excited about this. However, having seen it I can’t make my mind up on it. You may think I’m mad as the reception the model has received has been very positive, but like the standard Civic that was unveiled earlier this year, I just think it looks a little out of proportion.

I know, I’m in the minority here, in fact it’s probably just me, but it somehow doesn’t look ‘right’. The new prototype will be unveiled later today at the Paris Motor Show in a bespoke brush aluminium wrap. Although the new standard Civic has been designed to look sportier and more aggressive, it’s clear the prototype is not your usual Honda Civic.

The front is even more aggressive than the standard car and it won’t take you too long to notice the scoop on the bonnet either. Carbon fibre side skirts run down the side of the prototype with 20″ piano-black alloy wheels either side. At the back, you’ll find a large wing not too dissimilar to the one fitted on the current Type R.

Also at the back you’ll find not one, not two, but three exhaust pipes – who said three is a crowd? The outer two looked like two dustbins whereas the one in the middle is smaller in diameter and highlighted in bright metallic red. Below the tailpipes is a carbon fibre diffusor which runs across the wider rear bumper of the Type R prototype. Last but certainly not least, is the Type R badge to let you know this car means business!

What about the performance? When I can get one? How much? Tell me!!!

Other details have not been released by the Japanese firm but the pictures alone will be enough to send tongues wagging and other drooling. I must admit, the more I look at it, the more it grows one me…​​