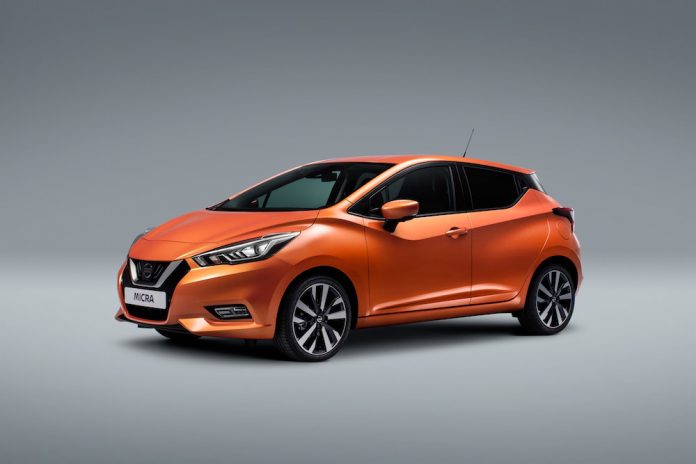 Now, I’ll be honest, I have never liked the Nissan Micra. They aren’t particularly good looking and normally driven by drivers that perhaps got their full license too soon. I know that’s harsh but I’m sure there are plenty of you reading this that’ll agree with me. Now though, there is a new one and it’s an improvement in the looks department (I can’t make any guarantee of the driving ability of those who drive it though).

Are you sure it’s a Micra?

Well you’ll soon know when you it indicating right and then going left – ok, I’ll stop with the bad driver gags. The front end sort of looks like a GT-R that has been squashed and it looks so much better than the previous generations of Micra. It’s certainly a long cry from the boxy first generation which is a bit of a sorry state now. The new model has been designed to turn heads and I think it will do, especially with that sweeping line down the side.

It’s lower, wider and longer than its predecessors so a result there’s more room inside. A choice of 10 colours will be available for the fifth generation, including Energy Orange, which I think looks pretty good on the Micra. It’s not all about looks though, driving comfort has been improved by lowering the driving position and giving more adjustment to the seat.

What will it come with?

The new Micra will come with more safety kit than the previous model, including Lane Departure Prevention – a first for its segment. Not only will it keep you safe but it’ll sound sweet to – a six-speaker Bose stereo system which has been developed with Nissan. A 7″ touchscreen is also on hand to deliver all the mod-cons such as Bluetooth, smartphone integration and sat nav. ​​Active Ride Control has been installed by Nissan to give enhanced ride comfort as well as Active Trace Control to give improved handling – features which had only been available in the Qashqai and X-Trail up until now. It’ll be one of the most aerodynamic hatchbacks as well, thanks to the combined roof and side spoiler.

Like many hatchbacks, the new Micra will be offered with a small 0.9 litre petrol engine which has been turbocharged to offer 90bhp. A 1.5 litre diesel is also available which is able to offer the same power output. The engine range will be extended to include a 1.0 litre petrol unit in the future, this will be able to offer 73bhp.

The new Micra will go on sale from March 2017 with prices yet to be confirmed.