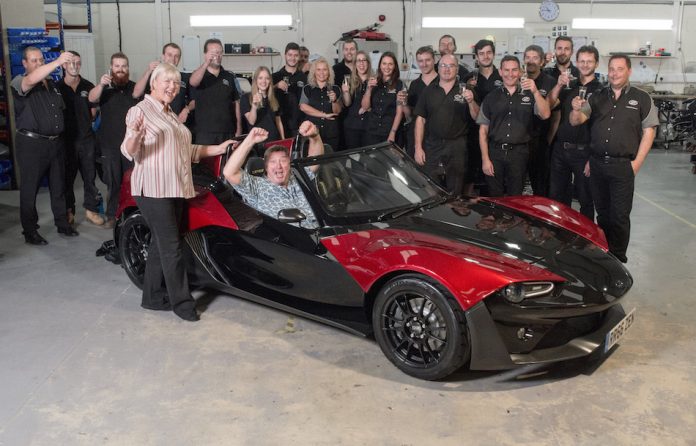 You may be not be aware, but I’m a big fan of Zenos. I like the way it goes about its business efficiently and I also love its welcoming nature. Earlier this year I asked if I could pop down and have a look around they duly said yes. I also asked (slyly) if I could have a go in one of the cars. Again, the answer was yes.

So I was very pleased to read that the Norfolk-based sportscar brand has now sold its 100th car. This may seem like a low number but the firm has only been going since last year and it makes around 2-3 cars per week – all by hand. The current Zenos range consists of the entry-level E10, the E10S and the rather bonkers E10R, which features 350bhp. That may not overly impressive as hot hatches are able to get around that power nowadays but bear in mind each car weighs about the same as a medium breakfast.

The car sold to achieve this momentous landmark was an E10R finished in a rather fetching custom colour – Soul Red. Is that homage to the great Mazda MX-5? Who knows? What I do know is that the E10R is proper quick. 60mph is over and done with in around 3.0 seconds. ​​Funnily enough the couple who picked the E10R up, Matthew and Georgina Streeter, had the 250bhp E10S but decided to upgrade to the top one – not that the E10S is what you’d call ‘slow’. Commenting on the couple’s new car, Georgina Streeter said: “We are thrilled to hear that we have played a small part in helping the Zenos team to reach this important milestone.

“The company has absolutely achieved its aims of producing thrilling and accessible sports car, and – just as importantly – has provided us with exceptional service. The fact that we’re already buying our second Zenos is testament to how delighted we are with the company and its cars.”

What does the boss think?

Mark Edwards, Managing Director of Zenos Cars, said: “We are delighted to see the popularity of the Zenos E10 series continuing to grow as more customers are drawn to the models’ unbeatable combination of thrilling performance, predictable handling and accessibility. Hitting our sales century in little over 18 months demonstrates the momentum that we’re building, as does the ongoing expansion of our sales network across three continents.”