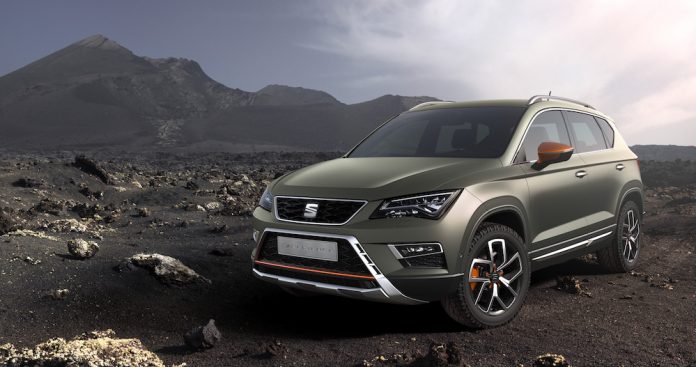 Update on the weather in Mallorca, the lightening is frequent and the thunder so loud is sounds like it’s right above me. So loud that it may be able to scare God himself, or wake the dead. Or both. The rain is falling harder than a boxer that’s been KO’d, yet the Welsh would still probably class this as a lovely summer’s day. Anyhoo… I recently tested the new Ateca and i was impressed with it, but now the Spanish brand has launched a new variant.

It’s called the Ateca X-Perience and it’s been billed as the “most demanding Ateca for the most demanding buyers”. It’s aimed at go-getting adventurers rather than mums going to get their children on the school run. As you’d expect it has four-wheel drive as well as the same driving modes you’ll find in the other 4Drive Ateca models, including one for snow and one for off-road.

Even so, SEAT predicts that buyers will still use this model on normal roads around 75% of the time which is more than I would have guessed but I suppose 25% is quite bit if you were to break it down. The new model sports 18″ alloy wheels which are wrapped with tyres with a higher profile to – woah, that thunder was ludicrously savage. Where was I? Ah, yes, higher profile to improve comfort when the going gets bumpy.

High ground clearance can be found as well as non-scratch paintwork to give protection when you venture somewhere nature wish you hadn’t. Chrome roof rails adorn the top as does a rear spoiler to give a little bit of flair. Inside you’ll find a rather ‘earthy’ looking affair with brown and green colour combo contrasted by orange stitching.

Power is delivered by the same 2.0 litre TDI found in the range-topping XCELLENCE with boasts 188bhp, mated to a seven-speed DSG gearbox. It’s quite a potent engine, in the XCELLENCE it’ll get to 62mph in just 7.5 seconds. Impressive. Prices and release date are yet to be confirmed but we may learn more when the car goes on show at the Paris Motor Show.