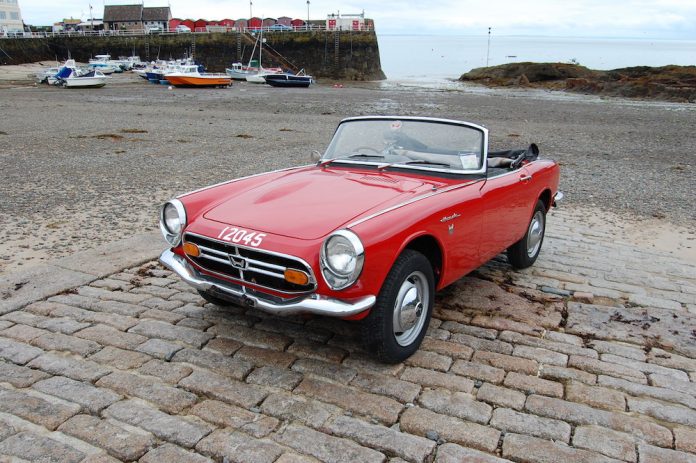 Finally the weather has calmed down in Mallorca after that simply biblical storm. Just as well my name isn’t Noah as I would have probably started to round up two of each animal! On to more pressing matters – the Honda S800. At first glances it could easily pass for an old British roadster but there is a difference here. This one is Japanese so you know it will work effortlessly and doesn’t need to be willed with kind words to turnover. The S800 is a special car to the Japanese brand, you see this its very first four-wheeled model to ever hit the UK. This particular model is to be restored, just in time for next year’s Goodwood Festival of Speed although at first the glance this red S800 looks to be in good knick.

In its day this 1967 example could get to a top speed of 100mph with power being fed from a 0.8 litre engine taken from Honda’s motorcycle division. The car was in production until May 1970 with almost 2,000 models produced. To help with the restoration Honda UK has drafted in Jersey-based Le Riche Automobile Restorers to get the S800 as good as new, if not better. ​​Philip Crossman, managing director of Honda UK, commented: “Next year, 2017 marks the 50th anniversary of the first four-wheeled Honda to be sold in the UK – the S800. And with this golden celebration for Honda in the UK, the S800 is the perfect addition to the press fleet.

“The engine still works perfectly, as you would expect from a Honda, so we don’t need to engage a complete overhaul of the car. The interior needs looking at as do parts of the bodywork – in short it simply needs some loving care and attention, which we are trusting to Le Riche, to get it back to its former glory.”