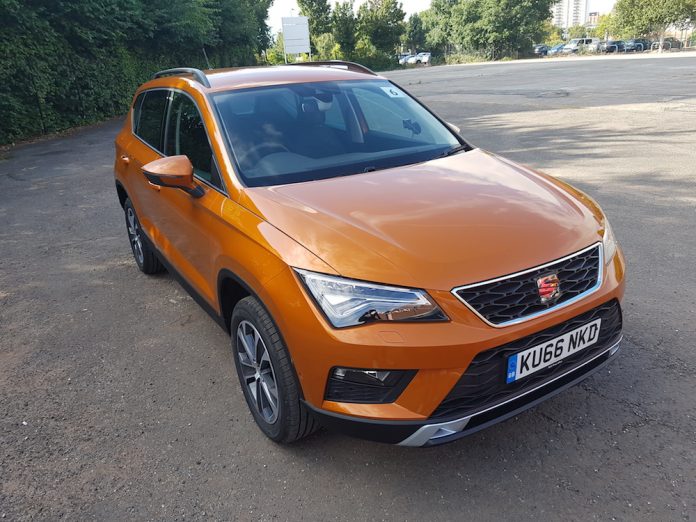 So here is the fourth and final part of my Ateca experience – the 1.6 TDI SE model. This should be relatively short and sweet as you should have a fairly idea of what I think of the SE models. If you’ve read this article first then it may be a good idea to start off with part one ;).

Well on paper it looks to be sluggish – 62mph comes in a rather yawn-inducing 11.5 seconds and the top speed is exactly the same as the 1.0 litre TSI unit – 114mph. However, that’s on paper, in the real world I found the 1.6 TDI was able to offer a good level of performance and pulling power. I found it was as smooth and refined as the 2.0 TFI and it sounded a little louder to me but it was still refined enough for me.

As with the other manual models the 1.6 TDI is fitted to a 6-speed manual gearbox, which as mentioned previously in pleasurable to use. it may be the slowest engine on paper but as a result it’s also the most economical – 65.7mpg is offered from the 1.6 unit. Unfortunately when it came to driving the car the traffic had built up so it became difficult to get a decent mpg. In fact the trip computer was sitting just under 40mpg towards the start of the journey which was not what I expecting but thankfully it did creep up as the trip when on. Despite taking it on a combined run I hit quite a bit of traffic and I didn’t have much luck with the traffic lights either. In the end I finished on about 47mpg.

My day with the SEAT Ateca was definitely a positive one. This may be the first SUV for the Spanish brand but its done well the Ateca. It’s clear that the firm has put a lot of money and effort in to the new model as its keen for the Ateca to become the ‘third pillar’ alongside the Leon and the Ibiza.

As much as I loved the 2.0 TDI XCELLENCE, I need to be realistic with the model I’d advise the paying public to buy as not everyone will want to stump up nigh-on £30,000. So with that in mind I would advise buyers to opt for the 1.6 TDI SE model. Yes it looks slow on paper but I hit no problems on the road and this model will also give the highest level of economy.

A good level of kit is on offer too and at a price of £21,015 it’s bound to make people think twice before going straight for the keys of the Nissan Qashqai. If I was buying an SUV I’d certainly be interested in the SEAT Ateca, although it’ll be interesting to see how sales compare with the new Skoda Kodiaq when that gets released.