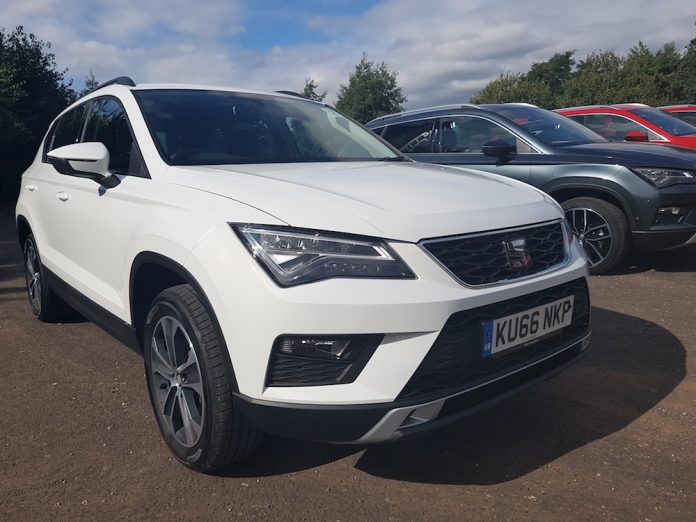 Nope, this isn’t deja vu, the third car was also finished in Nevada White. So this was the car I was quite keen to test – the 1.0 litre, mainly because I wanted to see how such a small engine would perform in a car of the Ateca’s size. 1.0 litre engines have become commonplace but these cars are smaller and lighter so what happens when you stick one in to a compact SUV?

As you can tell by my headline, the 1.0 TSI unit was a pleasant surprise, it obviously won’t bend you face with power but it shouldn’t leave you frustrated with its lack of power either. From the pint-sized engine you’ll be able to take advantage of a 113bhp output which gives this Ateca a 0-62 time of 11 seconds and a top speed of 114mph. Mated to a six-speed manual gearbox, it makes progress quite well and I think it ought to have enough poke to satisfy most buyers.

The 1.0 litre is also a little more frugal than the 1.4 TSI and 2.0 TDI units with a combined mpg figure of 54.3mpg. Around town the engine seems capable enough and it’s actually not as loud as the other turbocharged 1.0 litre engines I’ve tested this year. That’s kind of shame and some those units can make a nice, if not slightly unusual noise. However, this could prove to be a good thing for those who want a quieter engine and higher levels of refinement.

In the end I ended up doing about the same mpg as the previous two cars which is not surprising given the similar fuel economy stats. The question is would I recommend this model? Look, this is not a bad car by any means but I wouldn’t recommend it other the other ones, not unless you are on a bit of a budget and you’re looking for something that offers better – albeit not much – fuel economy than the 2.0 TDI 190PS and the 1.4 TSI models.

If you heart is set on petrol I’d advise you to get the 1.4 TSI as it has more power and a similar fuel economy, plus it has the SEAT driving modes which aren’t on offer in the 1.0 litre model. So all-in-all, the 1.0 litre does work in the Ateca but I would pass that option up in all honesty.