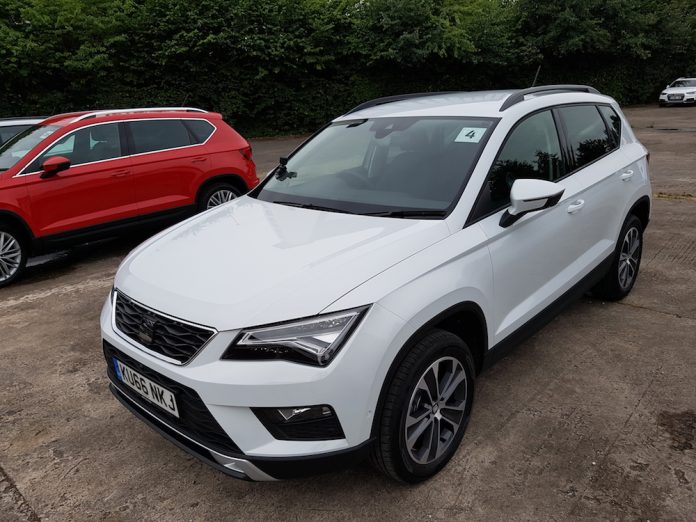 After the super-comfortable XCELLENCE I jumped in to the 1.4 TSI just before lunch to see how the manual gearbox and petrol engine compared. The car was finished in Nevada White and looks pretty sharp, although as mentioned previously I prefer the Samoa Orange.

What are the main differences?

Well for starters I lost the auto ‘box and was given a 6-speed manual gearbox which is mated to the 1.4 litre TSI engine that produces 148bhp. 0-62 comes in at a slower time compared to the 2.0 TDI with a sprint speed of 8.5 seconds and the top speed is a little slower too – 125mph.

So it may be a little slower but I found there was still a good level of performance on offer and the 6-speed manual gearbox was precise and well-weighted. A slightly shorter throw would be nice, especially as SEAT aims towards a sporty, dynamic drive but in all honesty I’m nitpicking here. Another difference I noticed is that the car felt a bit lighter, this is most likely due to the smaller unit at the front and the loss of the four-wheel drive system. Even though you lose the go-anywhere functionality of the 4Drive system you’ll still be able to enjoy the four other driving modes in the SE – Normal, Eco, Sport and Individual, but obviously you’ll lose the off-road options.

Last but not least I found this model, with the two-wheel drive, didn’t soak up the bumps as well as the four-wheel drive XCELLENCE did but that is mostly down to the different suspension set-up. It’s by no means a deal-breaker and I certainly wouldn’t call the SE uncomfortable but having driven it straight after the XCELLENCE I noticed a difference quite quickly.

What does the SE trim give you?

The 1.4 TSI SE starts from £21,015 and comes with a 8″ touchscreen with FM radio, Bluetooth and Full Link connectivity, dual-zone climate control, cruise control, rear parking sensors and 17″ alloy wheels to name a few. So with this in mind, I think this trim will have more than enough to satisfy most buyers.

Not really, the 1.4 TSI unit actually has the same MPG figures as the 2.0 TDI so it was unsurprising that I got a similar mpg figure of around 41-42mpg. So with this in mind I think the 1.4 is a good alternative for someone what wants a similar speed to the diesel but prefers their car to be powered by petrol. However, it does mean you won’t be able to select the DSG option so bear that in mind if you are thinking about a petrol Ateca.