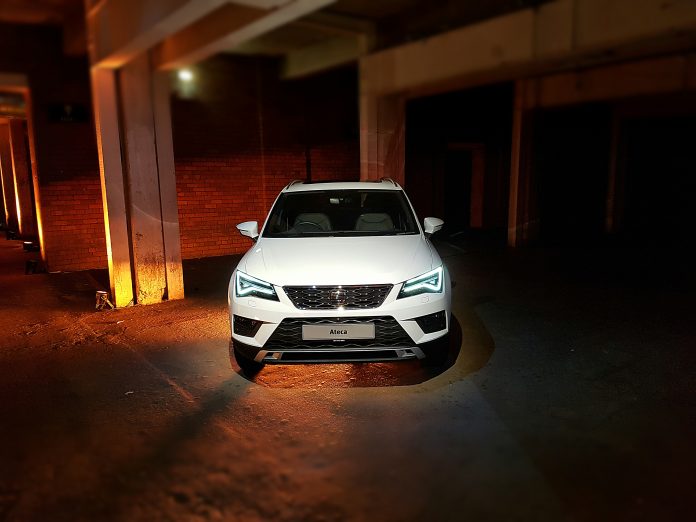 Hello everyone! Sorry the site was quiet yesterday, I was up in Manchester testing the new SEAT Ateca for the first time. I’m also flying to Majorca this afternoon so I’m writing this in the airport right this moment. Ever since I saw the first pictures of the car I thought it looks great so I was very keen to see it in the metal.

I saw a sneaky peak of a Nevada White model that was poking its bonnet out through the window where I was having breakfast at the hotel and it looked simply fantastic. After finishing my American-style pancakes I ventured outside to see another white model behind it and a Samoa Orange (who comes up with these names?) as well as a randomly parked Peugeot 308 GTI in a two-tone black/red colour – I approve!

I then clambered in to 1.6 TDI SE model with a bloke called John from The Sun in as a passenger. We had to make our way to the Victoria Warehouse which is literally a stone’s throw away from Old Trafford football stadium and despite the sat nav’s best efforts we made it there in good time.

The 1.6 TDI was smooth and pleasant to drive, plus the gearchanges were nice and crisp. The first word that really came to mind when driving the car was ‘smooth’ and in fact that’s the world that kept coming back to me throughout the day.

We parked in up in a drive-in kind of set-up inside Victoria Warehouse before we were greeted with popcorn in preparation for press conference. I won’t bore you too much with that but it was great see all the Atecas in different colours all parked up. After the conference was over there was time for a 10-minute break before I had to hunt down that car I was going to drive next. I happened to find myself in the top of the range model to begin with, the 2.0 TDI XCELLENCE. The 2.0 litre TDI diesel actually comes in two outputs – 148bhp and 187bhp – but it was the 187bhp model I was testing and needless to say, it goes. 62mph will be dealt with in 7.5 seconds which is impressive for a car of its size and it will continue on to a top speed of 132mph.

Priced at £29,990 the XCELLENCE of course comes with a fair amount of kit, including 8″ infotainment system with sat nav, MirrorLink and Bluetoooh connectivity, wireless phone charging, leather interior, power tailgate, 18″ alloy wheels and rear tinted windows. My car had a few options selected however, so it was getting on for almost £35,000.

As mentioned, the 2.0 TDI certainly has a bit of poke but it’s very happy to cruise along at higher speeds in an almost silent manner, making the car refined and comfortable. In fact, driving the car was as easy as taking candy from a baby and I have no doubt it will swallow up plenty of miles with little effort.

The automatic 7-speed DSG gearbox was efficient as well, there were one or two times where I felt it wasn’t in the right gear but it was able to correct itself and as auto boxes go, I was pleased with it. Especially as it adds to the higher cruising ability of this variant of Ateca. The economy was ok, I ended up getting around 41-42mpg on my combined run – around 11 under the 53.3mpg set by SEAT.

The XCELLENCE has a selection of driving modes on hand as well to suit all occasions – Normal, Eco, Sport, Individual as well as two off-road ones as this trim level features four-wheel drive. If you fancy the four wheel drive but don’t want the DSG gearbox then you can opt for the cheaper XCELLENCE model with the 6-speed manual gearbox but that means the power drops to 148bhp.

The 2.0 TDI XCELLENCE is indeed a very nice car but as it’s getting on for £30,000 I imagine it won’t be sold as much as let’s say the 1.6 TDI SE I tested later in the day. However, if money was no object then this is the one I’d probably go for, it’s smooth and relaxing when you want it to be but it can really get a shift on when you need it to as well.
It’s very comfortable and thanks to the level of refinement, this Ateca model is pretty effortless to drive. My only real gripe is the sat nav which I found to be a bit dim-witted at times but technology aside, the first full drive in an Ateca was definitely a positive one.

Right, I’ll be getting on the plane shortly so you’ll have to wait for the next instalments I’m afraid!