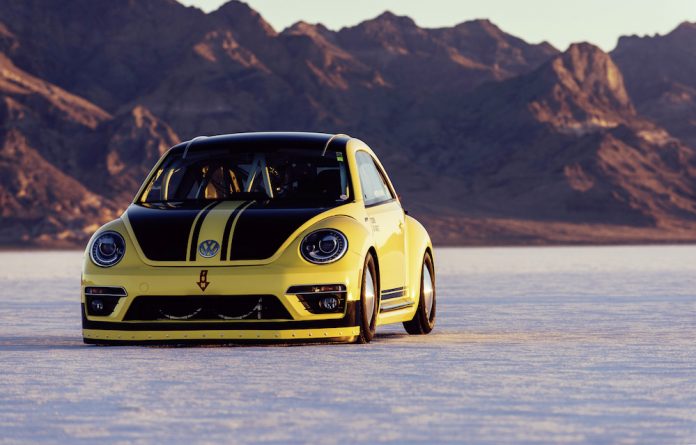 This year’s World of Speed event at the Bonneveille Salt Flats had a Volkswagen Beetle in attendance. But nor just any Volkswagen Beetle. A specially-tuned model took to the infamous Salt Flats packing a 542bhp arsenal. Yes, you read that right, 542bhp! Herbie has been upgraded!

With this mighty amount of power under the hood the Beetle was able to reach a top speed of 205mph – that’s more than a Jaguar F-Type SVR!!! This means this is *clears throat in anticipation for Jeremy Clarkson impression* the fastest Beetle…….. in the world. Yup, nailed it. The tweaked 2.0 litre engine is able to throw out 55bhp as mentioned, as well as an impressive 571Nm of torque, so it had more than enough to be crowned the world’s fastest Beetle. However, the Beetle feature more than a heavily tweaked 2.0 TSI engine. The car may only be going in a straight line but you need more than brute force to get decent performance on the Bonneveille Salt Flats. The unique Beetle was fitted with special wheels and tyres designed to work on the loose surface and a limited slip-diff was also put in to improve traction. Oh, last but not least, it had two parachutes to help slow it down a the end of the run.

I would have loved to have seen the yellow speed machine in action but sadly there was no video attached to the press release so you’ll have to make do with photos I’m afraid!