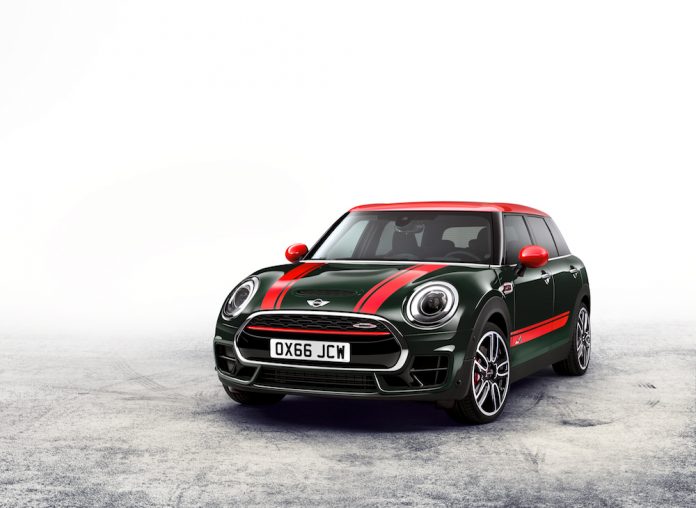 I must admit, I’ve always had a bit of a soft spot for John Cooper Works models. However, I’m not sure if I’d be bold enough to buy one as the modern Mini still has a reputation for being driven by women and once upon a time it was the choice of cars for estate agents. The modern Clubmans haven’t really been much of a looker in my opinion but Mini has done something to help spice it up, by introducing the Mini Clubman John Cooper Works.

As you can expect, the Clubman will pack a fair punch underneath its bonnet – the 2.0 litre turbocharged engine is good for 231bhp, making it the fastest ever Clubman to be produced. This new model also marks the first time that the firm has combined its most powerful engine with its ALL4 four-wheel drive system. ​​The spicy engine can be mated to either a six-speed manual gearbox or an automatic that has no less than eight speeds. The Clubman is able to achieve a top speed of 148mph and will race to 62mph in a very impressive 6.3 seconds. The economy figures are hurt too badly by this added power – a maximum of 41.5mpg can be achieved if you select the auto ‘box with emissions of 154g/km of CO2.

As well as a new engine the Clubman has been treated to firmer sports suspension as well as bigger brakes, sports seats and an alcantara headlining in the cabin. You do of course get the traditional JCW styling and badges to get it apart from the other Mini models and a good level of kit which is just as well as this new model, which is available to order now, starts at £29,345 (for the manual). That’s not too far of a Focus RS or a Golf R!

​​For you hard-earned cash though you’ll receive sat nav, Bluetooth and USB connectivity, cruise control with brake function, model-specific alloy wheels and logo projector lights which are not particularly handy, but cool nonetheless. Oh, and that ‘Rebel Green’ paint finish? That’s an optional extra I’m afraid… The new model is available to order now and the car will be on show at the Parish Motor Show later this month.