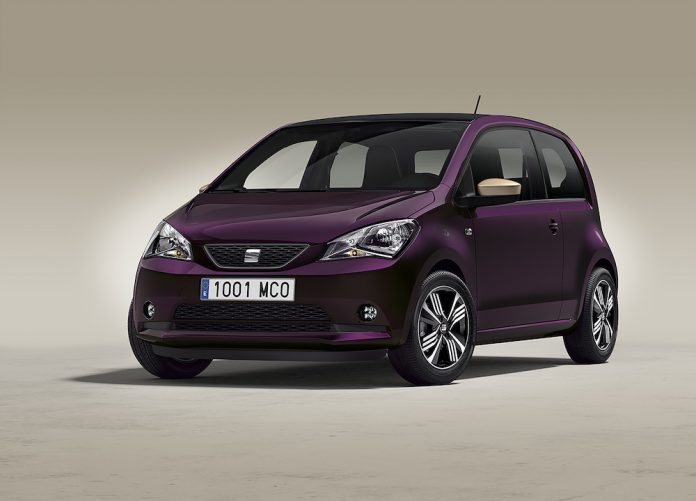 Earlier this year DS announced the new Givenchy DS3, a car that features make up in the front armrest, so naturally it was aimed towards women. But in case you happen to be a female and didn’t quite fancy the DS3 you’ll be pleased to know SEAT is able to offer an alternative.

The car is called the Mii by Cosmopolitan and it doesn’t take a rocket scientist to work out what it’s all about. Strutting its stuff down the catwalk at last night’s #FashFest, the new Mii has been co-created by Spanish brand SEAT and women’s lifestyle magazine Cosmopolitan. It’ll be available as of early 2017 in a choice of two colours with a 1.0 litre engine under the bonnet. You won’t find any makeup in this model I’m afraid but you will get some fashion inspired styling, including front headlights designed to give and ‘eyeliner shape’.

As mentioned, there will be a choice of two colours, Violetta and Candy White, which are both contrasted with champagne-coloured door mirrors. Inside, the champagne theme continues on items such as air-vents, infotainment system surround and interior stitching. The seats are trimmed in alcantara and the headlining has been finished in dark tones to provide a sense of glamour. Let’s just hope they haven’t put those cheap fairy lights in the ceiling like you get in a cheap limo!

​​What about kit and engines?

Just on engine will be available in the new Cosmo Mii, it’s a 1.0 litre petrol engine that produces 74bhp, which is mated to a five-speed manual gearbox. It’s obvious it won’t offer blistering performance but SEAT says the new Mii will be “agile” and “exciting”, a bit like a rampant – never mind. The 1.0 litre unit is able to offer up to 64.2mpg and emits 102g/km of CO2 emissions. In regards to kit buyers can expect usual mod cons such as air conditioning and Bluetooth as well a new infotainment system. ​​The price for this new fashion accessory on wheels has yet to be announced but what we do know is that it’ll be available early 2017.