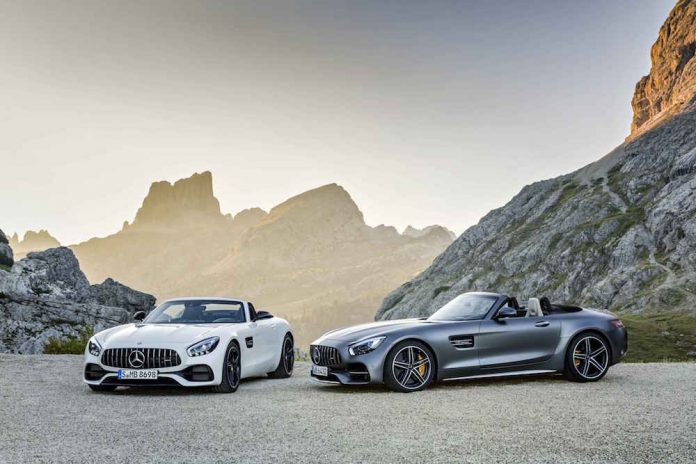 Mercedes has taken the lid of the AMG GT and GTC, sadly there is no plans for the GTR roadster as of yet. If you were expecting a fancy folding metal roof you’ll be surprised as a fabric roof adorns both models. It may not be as aesthetically pleasing as a metal roof but it takes 11 seconds to go up/down and a choice of three colours are available – black, red and beige.

The GTC Roadster borrows quite a few things from the epic GTR coupe revealed earlier this year. Unlike the GT Roadster, the GTC Roadster has the same rear width as the GTR and the same electronically controlled locking differential. The GTC is not as fast though – the 4.0 litre Biturbo V8 engine under the long, muscular bonnet produces 557bhp and 680Nm of torque.

​​That’s 27bhp less than the GTR but 47bhp more than the GTS Coupe and almost 100bhp more than the GT Roadster. 0-62mph comes in 3.7 seconds which is the same as the new Audi TT RS Coupe but with a top speed of 196mph the GTC is faster overall. Both the GT and GTC feature the 15 spoke Panamericana grille that sits proudly at the front of the GTR.

What about the GT?

The GTC is very capable machine but the GT should not be overlooked, even if it is slower. It has the same 4.0 litre V8 Biturbo engine which produces a ‘smaller’ power output of 476bhp and 620Nm of torque. 62mph will be achieved in a predictably slower time of 4.0 seconds – which is still very impressive – and the top speed is 188mph.

The dual clutch transmission for the GTC has been improved by improving the hardware and software, this means the seven-speed auto-box will have faster throttle responses and more agile acceleration. Both the GT and GTC receive the active air management used in the GTR which uses special vertical louvres that open when the engine needs extra air but remain closed during normal driving to create less drag.

The new cars will be available at some point in 2017 the prices are yet to be released. Remember, good things come to those who wait.