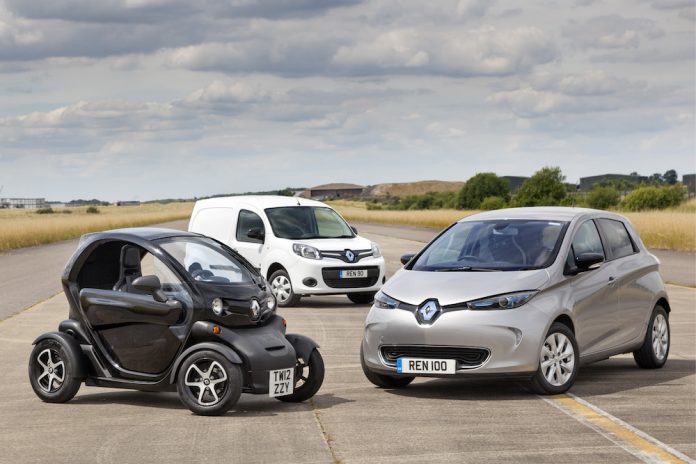 You’ve probably noticed I don’t often write about electric cars. I don’t have anything against them, I just don’t think they’re the future if you ask me. Plus I love the sound a of a proper engine too much to be drawn towards something hums away like a computer. I accept electric cars have a place in the motoring world – they’re just not really for me. That aside, let’s move on to Renault’s latest landmark.

French firm Renault has today announced it’s handed the keys over to its 100,000th electric vehicle. In this case this it was the ZOE model, which was sold to Norwegian by the name of Mr. Åsmund Gillebo. To mark the momentous occasion Mr Gillebo was given five years of Fortim recharging and 100,000 minutes of free recharging from Grønn kontakt, both of which act as the local energy suppliers.

Renault is the leader for electric vehicles in Europe having sold 15,000 in the first half of 2016 – 32% more than last year. In fact, one in four electric vehicles are made by Renault and in France that figure increases to one in two. The main market for Renault’s electric models are of course France as well as Norway, Germany and dear old Blighty.

Speaking of the UK, the ZOE has seen a 39.4% increase in sales in the first half of 2016 compared to 2015 and it’s also won it’s fair share of awards. These include What Car?’s ‘Best Electric Car Under £20,000’ for three consecutive years, plus it was recently voted second in the Auto Express Driver Power vehicle ownership survey.

Eric Feunteun, Director of Renault’s Electric Vehicle Division, said: “Every year there are more customers for electric cars and Renault is making a major contribution to this with its constant innovation and dedication to developing infrastructure. Our customer satisfaction, which stands at 98% for the ZOE, encourages us to keep pushing onwards”.